The city’s African-American “elites” met last week in the basement of a church on East 22nd Street to decide on a candidate they can back without letting few members of the Black community entry, according to those who attended.

“It was invite only,” said David Gilmore, a mayoral candidate, who was invited to the private meeting along with Donna Nelson-Ivy, director of the city’s health department, who is running for her boss’s job, according to sources. “Few people that showed up that were not invited were turned away,” said Gilmore.

Ernest Rucker, an activist, and Bilal Hakeem, a council at-large candidate, came out to the Canaan Baptist Church, the meeting’s location, on Thursday evening to observe the proceedings. “The meeting was supposedly a screening,” said Rucker.

The meeting was organized by Benjie Wimberly, an assemblyman, and Shavonda Sumter, an assemblywoman, both somewhat influential personalities in the city’s political scene, to decide who would receive their support for the upcoming mayoral election. “The premise was to come and go through a selection process for determining who they wanted to support for mayor,” said Gilmore. The meeting was to determine who would be best suited to represent the interests of the African-American community and the city itself; that was what he was led to believe, said Gilmore.

The meeting did not remain faithful to its purpose of screening out a viable candidate the entire community can rally behind, said Gilmore. “Somewhere during the meeting it turned into ‘Would I support Jeff Jones’ and I told them ‘No’,” said Gilmore. “When they started to ask me about Jeff, I think the meeting was a bit sour because I would not subscribe to any level of support for an incompetent mayor.”

Gilmore said the duo attempted to unsuccessfully convince him to support Jeffery Jones, the city’s incumbent mayor, using a racial argument. “It was a Jeff Jones pep really,” said Gilmore.

Rucker and Hakeem made it inside the church’s basement, but after taking a seat they were told to leave the basement conference room. “Shavonda had gotten very very irate because we’re not on the list, and asked us to leave,” said Rucker. The assemblywoman’s office did not respond to requests for comments via phone and email. “I was asked to leave,” said Hakeem, who was told to remove himself from the basement. Hakeem said he was allowed to remain on the above floor. “I was really taken aback by that, you know,” said Hakeem.

Rucker said it was a Democratic fest with Wimberly attempting to play the role of a political boss from the days of yore. “We worked very hard back in the day to get the political bosses out of Paterson,” said Rucker. When asked why Hakeem was denied entry, Rucker said, although the council at-large candidate is a Democrat he is not in the same circles. “He’s not part of the Paterson Black Democratic Party,” said Rucker. “He’s not part of their inner circle.”

Rucker cited Terrence Love, a Passaic City councilman, who despite being a non-resident, was allowed to attend the meeting. He suggested it was a small group of people attempting to decide who can run and who cannot in a non-partisan city. “How do you deny any Paterson resident from participating in something that you’re calling a screening process for candidates?” asked Rucker. 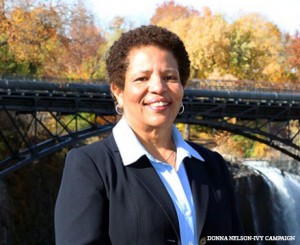 Donna Nelson-Ivy, director of the city’s health department and a mayoral hopeful.

A week prior Jones was vetted during a separate meeting. On Thursday it was the turn of Nelson-Ivy and Gilmore. Rucker said he felt bad for the way Nelson-Ivy was treated at the meeting. “The way they beat up on Donna was unfair,” said Rucker. “They didn’t give her an opportunity to be part of the process.”

Rucker said Nelson-Ivy was asked if Sumter and Wimberly did not support her would she back Jones for a second crack at the city’s highest office. Message was left at Wimberly’s office on Friday seeking comments, he has yet to return the call.

The meeting, which was attended by a number of the city’s political leaders, including Theodore Best, county freeholder; Kenneth Morris, councilman at-large; William McKoy, 3rd Ward councilman; and many others – altogether about 25 individuals –, appeared to be a gathering to drum up support for the incumbent, according to Rucker. “This was to gain support for Jeff Jones,” said Rucker.

“King Benjie” should not wield the power of a political boss, said Hakeem.