Tenant finds her cable and electricity being stolen | Paterson Times 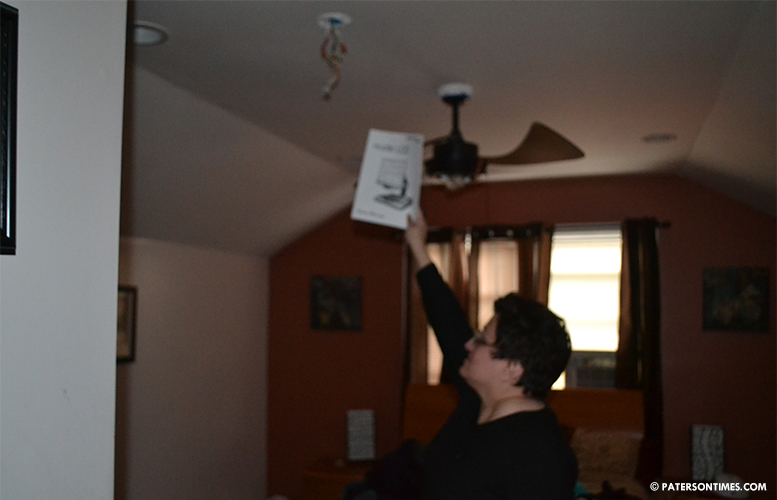 Wilma Ariza walks into her kitchen, points at a speck of mold growing on the ceiling, and says, “Water’s been coming down from the top floor.” Due to water damage to the ceiling, at times, said Ariza, she avoids turning the kitchen light on for fear the bulb might blow.

Ariza began renting the second floor apartment at 593 Market Street in February 2013. When the owner was showing her the apartment there were cracking paints, exposed wiring, broken door bell, and bad power sockets, all of which the owner promised to address. “Everything was going to be up to the code,” was the promise made to her by Henry Rodriguez, her landlord, when she was being shown the apartment. “He had assured me he’d fix them,” said Ariza.

A month after she moved into the apartment nothing was fixed. Ariza, who dwells at the home with her son and daughter, paying $1,600 monthly, began withholding rent in March. It would be few months later, when she would stand in front of a judge, making her case against Rodriguez. In the mean time she uncovered other problems with the apartment.

“They were stealing my electricity,” said Ariza. “My gas and electric bill was over $1,000.” Seeing the bill, she suspected there was some sort of funny business taking place, and asked Public Service Electric and Gas Company or PSEG to send out an investigator. The company sent out an investigator, and uncovered a pool filter and a room in the basement was being powered by diverted electricity taken from her apartment. She took the information to court, presented it before a judge, and Rodriguez agreed to cover 25-percent of her electricity bill due to the diversion of service.

PSEG investigation report stating there was a diversion of service.

“The agreement was I pay 25% of the electricity and she pay 75%,” said Rodriguez, who stated that nobody at the home uses electricity connected to the basement room except the first floor tenant, who use the room as a storage box. The landlord complained the settlement was inherently unfair because he did not live or rent the basement.

“We don’t have illegal room there,” said Rodriguez of the basement, when asked whether he was illegally renting the basement and providing them free utilities at Ariza’s expense. Three times inspectors from the city’s division of Community Improvement came out, after Ariza complained, and ticketed Rodriguez for having illegal dwelling in the basement. Rodriguez said the illegal dwelling tickets were later dismissed by a judge. Rodriguez, who lives in Pennsylvania, could not provide the papers showing cases’ dismissal.

Tickets issued to the landlord by the city for having an illegal dwelling in the basement.

Besides the illegal basement diverting her electricity, Ariza found a splitter connected to her outside cable wire, which was presumably powering televisions in the basement and in the first floor. “There was an illegal splitter on my cable line,” said Ariza, who stated the first floor folks were stealing her cable. She contacted Cablevision; the cable company sent out an investigator, who was denied access to certain sections of the property. The investigator was threatened by Rodriguez, who said he will be “ripping all the Cablevision wires off the home.”

Letter from Cablevision stating the owner threatened to cut cable wires off the home.

Rodriguez later said the issue with the cable is between the first floor and the second floor. “What happened between her and the other tenant I cannot control.” said Rodriguez. “These people they fight each other.”

Ariza said, whenever there is an upcoming court date, she finds her tires slashed and her vehicle windows smashed in. She suspects the landlord is using the first floor tenant to vandalize her vehicle in order to prevent her from appearing before the court.  She showed multiple police corroborating her statement.

In September the landlord took her to court, where a judge ordered Ariza to pay the withheld rent. The judge also offered an abatement due to the broken promises of repairs – she was told to pay $1,200 in rent rather than the contracted $1,600 until the owner makes necessary repairs. Four months after that court ruling, Ariza’s apartment continues to grow mold inside the ceiling due to water leakage coming from the attic. “Every time they take a shower it rains down here,” said Ariza.

Her landlord said the attic bathroom is part of her apartment, so when it rains it’s her fault. “If it flooded it’s her fault,” said Rodriguez, who said he has sent repairmen to fix the bathroom, but each time they drop by Ariza doesn’t open the door. Ariza said the owner did not put in place a working doorbell, making it impossible for her to know when the repairmen are at the property.

Ariza complained that this homeowner is able to get away with so much without having to answer to anybody. She said she has sent certified letters to elected officials and has yet to hear back from any of them. Ariza sent letters to: Jeffery Jones, the city’s mayor; Julio Tavarez, the 5th Ward councilman; Anthony Davis, the 1st Ward councilman; Kenneth Morris, councilman at-large. None of the local officials responded. She also wrote to John Hoffman, acting attorney general of the State, who responded, stating her communication was forwarded to the Department of Community Affairs, which will presumably investigate her case.

“I don’t know what the real deal is, and the government won’t help me. I called everybody, I been everywhere, and nobody will step-up to do their job,” said Ariza. “I feel like that’s one reason he feels he can do whatever he wants with me.”