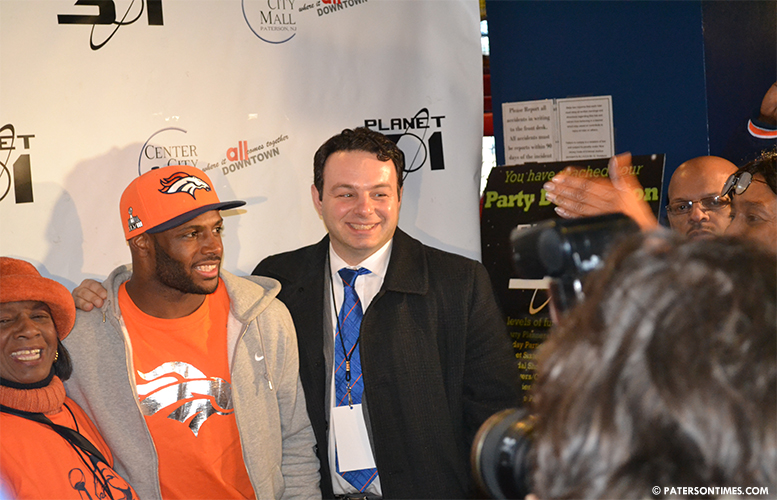 A throng of Patersonians packed into a small space inside the Center City Mall on Tuesday afternoon to cheer on hometown footballer Mike Adams, safety for the Denver Broncos, before Sunday’s Super Bowl.

Giddy politicians of all stripes flocked to Adams for photo op. “All of us are so so happy that we have another Patersonian going to the Super Bowl,” said Ruby Cotton, the 4th Ward councilwoman. “Paterson is behind you 100%.”

Adams, a native son, recalled growing up on Godwin Avenue as a child. “I used to go around the block just to stay in shape,” said Adams. “As I got older, I would go to Eastside Park just to work out.”

Adams recalled growing up in the crime ridden neighborhood of the Fourth Ward during numerous interviews; during a particular interview this week he compared the city cancer. “Earlier in this week, I had an interview, and I talked about Paterson. I said, Paterson could be cancerous and a lot of people got offended when I said that,” said Adams. He stated he meant the negativity in the city is like a form of cancer that snowballs; however, now that positive news is surrounding the city, he added during the pep rally at the mall, it will snowball as well.

“We all want to say we are proud of you,” said Jeffery Jones, the city’s mayor. Benjie Wimberly, assemblyman representing the State’s 35th district, former coach to Adams, said, “We’re going to send Mike to the Super Bowl the right way.”

Andre Sayegh, a mayoral candidate and council president, took the form of an oracle, saying, “Last night I had a dream about the game, and the score was going to be 19-13 with one minute to go, the Seahawks were up, and Russell Wilson drops back and he throws, and it’s intercepted by number 20 Mike Adams.” The Broncos with a score of 20 beat the Seattle Seahawks, winning Super Bowl XLVIII (forty-eight), in Sayegh’s dream.

It wasn’t just politicians and fans there were also other famous athletes the city produced: Kendall Holt, welterweight boxer; Marcel Shipp, another footballer, who played for the Arizona Cardinals. “Paterson is a place where there’s so many athletes you never even hear about,” said Shipp. “Having guys like Adams magnify Paterson and represent it in the Superb Bowl shows you the type of guys that come from Paterson.”

Adams had stated if his team wins the game on Sunday, he will, with his helmet still on, tread up to his hometown. “If I decide to walk, how many people are going to walk with me?” asked Adams. Hundreds of enthusiastic hometown fans roared back they all would.