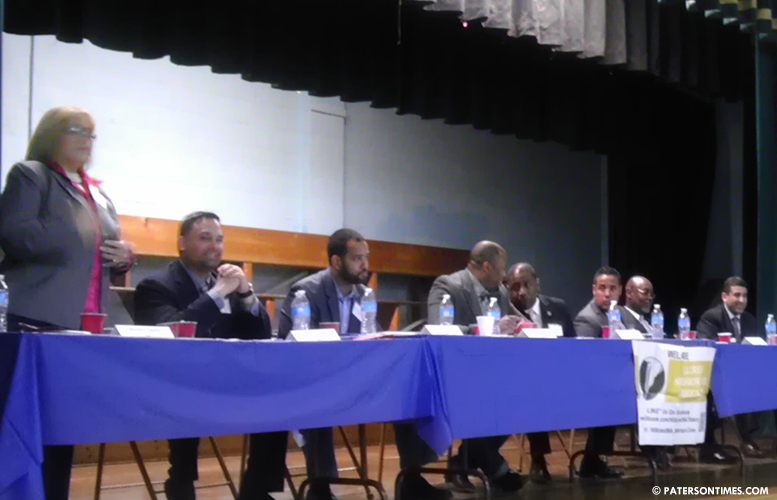 With all eight candidates vying for the three council seats in attendance, Wednesday’s council at-large candidate forum hosted by the Hillcrest Neighborhood Association allowed residents to become acquainted with the views and candidates running in the May 13th election to represents the city at large.

A moderator appointed by the association asked three questions to the eight candidates giving each two minutes to respond.

The candidates were asked what steps they would take to have the flood insurance map for the Hillcrest section near Molly Anne’s Brook redrawn so as to reduce flood insurance burden on property owners. Currently, according to residents, each property is paying an average of $3,000 yearly for flood insurance.

Bernard Jones, who works as an executive assistant at the Paterson Community Health Center, said he will create a committee that will tackle the issue for property owners. “They’re going to say we want to see what insurances the surrounding towns are paying compared to the $3,000 they’re charging us,” said Jones.

“They must have lower taxes than other houses in non-flood areas,” said Haytham Younes, an accountant, suggesting the city reduce the insurance burden by giving flood zone homeowners a tax cut.

Michael Jackson, owner of the popular Jacksonville Restaurant; Eddie Gonzalez, an outreach worker with the New Jersey Community Development Corporation (NJCDC); and Maritza Davila, who is an assistant admissions director at the Passaic County Community College, said residents should organize and protest to their state and federal representatives.

“It’s not something that will come before the city council” said Kenneth McDaniel, incumbent, telling the audience to engage with state and federal officials to correct the map error, for the U.S. Army Corps of Engineers has addressed the flooding issues in the area and there’s no reason why residents ought to pay excessive insurance premiums.

Kenneth Morris, incumbent, said residents of the area should band together and file a class action lawsuit against the insurance companies that are overcharging. “You sue and force them to re-draw those maps unless they can definitively prove this is still a flood zone,” said Morris.

Then the association asked what plans each candidate had to reduce property taxes in the city.

Morris, who voted against the recent budget that had a thousand dollar tax hike, said to reduce taxes the city has to cut spending. “We need to reduce overtime costs, particularly for police and fire,” said Morris. “We [can] hire special police at a lesser salary.”

Special police officers are part-time employees who are paid less, who do not receive the perks a regular cop receives, and have the capability to use full police power when on duty, making arrests, issuing tickets.

“Our spending is out of control,” said Gonzalez.

“It took them a year to get a CO [certificate of occupancy],” said Davila about Mamajuana Cafe. “We have a lot of red tape,” said Davila, who agreed that to reduce taxes the city had to bring in more businesses. “We need to reduce red tape.”

“The city has to focus on bringing new businesses into the city,” said Jones. “We need to offer them tax credits.”

“Why have a house boarded up for five years and lose $8-10 thousand dollars in taxes,” said Jones, who suggested the city start up a homebuyers’ program and sell off abandoned properties at cheap rates to increase revenue.

“One thing that we do need to do is another city wide revaluation,” said McDaniel responding to the question. At present the city uses peak-of-the-market prices from 2007 to determine how much in taxes a property should pay; a revaluation would bring down the assessed value of a home, and thereby reduce taxes.

“Why all of the sudden in 2014 the budget is $242 million?” asked Younes while reading the total amounts in previous years’ budgets that were slightly lower. “The city is going to have expenditures — you have inflation” said Jackson.

“Until we begin policing our neighborhoods,” said Jackson, “the violence and crime will continue.”

Jackson wants more residents in the city’s police force; those who live in the neighborhoods will do a better job patrolling it, according to Jackson.

Gonzalez took it a step further by urging residents to form neighborhood associations and collectively call the police department whenever there is an incident in the neighborhood.

Davila said when one area of the city manages to suppress crime and drug activities, it simply moves to a nearby neighborhood, making it difficult to address public safety. “We have to make sure our entire city of Paterson is protected,” said Davila, suggesting the city focus not just on hotspots but on the entire town.

“We need 34 officers to cover Paterson, eight zones, 24-7, forty hours a week,” said Younes, who wants to create eight districts for police to patrol. Younes followed his comment by saying the police department could be run with 200 employees.

Younes’ suggestion appeared silly to some of the candidates and some audience member shrieked at the naive idea. At a time when most residents have been expressing a need to hire more police officers, Younes is suggesting a reduction.

“There has to be an effective planning with the sheriff’s office, the police department and the prosecutor’s office,” said Mendez. “This area, the 2nd Ward, is losing the quality of life,” appealed the school board member to an audience of mostly Totowa and Hillcrest sections residents inside School 27 on Richmond Avenue.

The incumbents exploited the opportunity by mentioning some of the legislation the council is working on to institute a state mandated special police ordinance. “As your current city council vice president,” said McDaniel, “the ordinance for special police is being sponsored by yours truly.”

McDaniel said the ordinance is written in such a way as to ensure city residents are hired for special police positions.

The forum lasted about two hours with roughly 100 residents in the audience attentively listening to the candidates who spoke without microphones. Candidates did not exchange aggressive words, but there were subtle murmurs.

Errol Kerr, school board member, who was in the audience, asked a question to Davila. He asked whether her wish to snatch Rigo Rodriguez’s vacant seat is an endorsement of McDaniel and Morris. Kerr also asked if she could name few negatives and positives about both.

Davila took a snipe at McDaniel’s vote on the recent budget, saying, “I can come out and say something about Councilman McDaniel about the budget, but I’m not.”

Jackson, who repeatedly said during his opening and closing, that he will be a “non-combative personality” on the council, was attacked by Morris. “I know some of my colleagues talk about combativeness. I don’t know whether they’re referring to me,” said Morris. “I was elected to get a job done, and if that means challenging this mayor and this current administration when it missteps, that’s what I’ll do.”