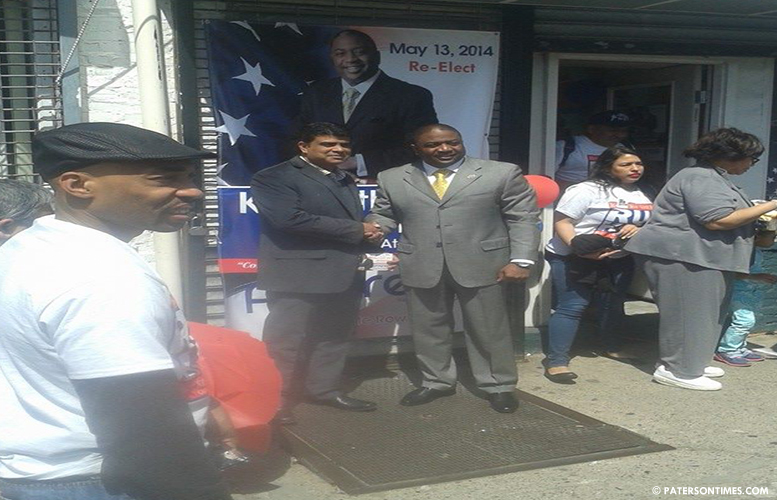 “As you know, I’m running for re-election,” said McDaniel. “About 21 months ago or so I was elected in a special election to fill the seat of our now assemblyman, former councilman Benjie Wimberly, and since that time I’ve been on the grind.”

Wimberly, state assemblyman representing New Jersey’s 35th legislative district, endorsed the councilman who succeeded his seat in the council in 2012.

McDaniel, an assistant superintendent at the Passaic County Technical Institute, is concluding Wimberly’s unfinished term and is seeking a new four year term.

“I’m asking each and every one to please stand behind Ken McDaniel and vote for him again this year,” said the assemblyman, endorsing McDaniel.

Wimberly praised the councilman’s work in the council saying, “It’s without hesitation, that I know Ken McDaniel comes from the city of Paterson, and has been representing us well.”

Undeceived by the city’s past glory, McDaniel said, “I don’t like to talk about how it used to be because whatever it was we’re never going back to that.”

City residents often look on the past with rose-colored glasses envisaging what the city could be only if it were restored.

McDaniel voted in favor of the soon-to-be-constructed hotel near St. Joseph’s Medical Center by Medical Missions for Children. He voted in the affirmative on the recent budget. And McDaniel voted to designate the city as a Garden State Growth Zone by tagging it onto the Economic Opportunity Act of 2013 which gives developers incentives to construct projects in the city and hire local residents in return for receiving tax credits from the state.

The broad support from his council colleagues underscores the dispassionately diplomatic way in which McDaniel conducts council meetings in absence of the council president.

Tavarez, a Dominican-American, crossed ethnic lines – not commonly done in the city — to endorse McDaniel.

“Tell people to vote for Councilman McDaniel like I’m doing, not because he’s African-American, not because I’m Latino, because he’s going to work for all of us,” exclaimed Tavarez. “Let’s get this man back in the city council.”