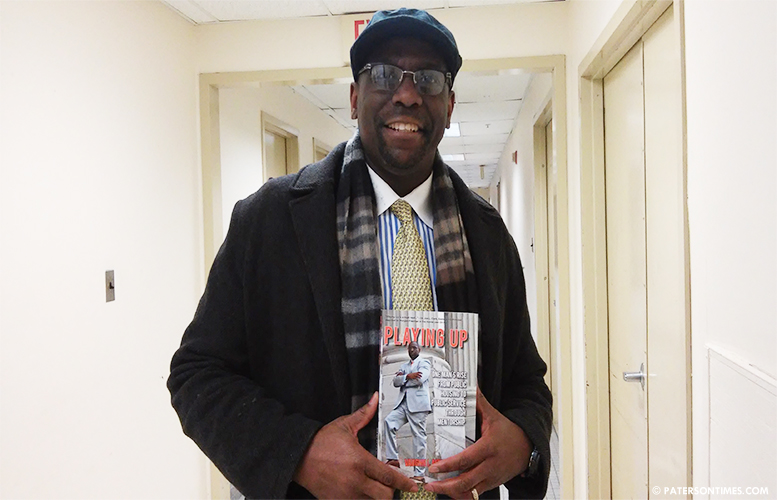 Vaughn McKoy, an Eastside High School alumni who went on to become a successful attorney, at one point leading the New Jersey Division of Criminal Justice, donated 5,000 copies of his book to students of the city’s public schools.

McKoy’s book “Playing Up: One Man’s Rise From Public Housing To Public Service Through Mentorship” chronicles his hardscrabble life growing up in the gritty Christopher Columbus Projects (CCP) during the crack-cocaine epidemic of the 1980s. He inoculated himself from drugs and the lure of the street by filling his high school life with basketball and football so much so that at times practice for one or the other of the two sports caused scheduling conflicts.

Shielding himself from drugs and the streets did little to protect him from becoming a dad at the age of 16. McKoy was overwhelmed, unsure how he would support a baby, but the mother’s family stepped in, allowing him to finish school.

If there was salvation for a poor inner city kid, it was through sports, McKoy understood early on. He eventually became the recipient of a football scholarship from Rutgers University in New Brunswick. After graduating from Eastside High School in 1986 he earned a four-year degree in criminal justice from the university.

McKoy, 46, then went on to secure the career many thought he would: becoming a lawyer. He secured a juris doctor from Rutgers-Newark.

“Vaughn, I think one day, you’ll make a good lawyer,” was what his 4th grader teacher Juanita Jones told him many years ago. She had made the comment due to his garrulousness in class, but it was this comment that propelled him towards becoming an attorney.

“It was the seed that Juniata Jones put in my head that led me on the path to becoming an attorney,” said McKoy.

He later became an assistant United States attorney in the district of New Jersey following a stint in the private sector. After that McKoy — unrelated to councilman William McKoy — became the director of the New Jersey Division of Criminal Justice.

McKoy, like thousands of city students, had very little to begin with, but through perseverance, hard work, and help from a large number of mentors, football coaches, basketball coaches, professors, and colleagues, he managed to obtain success.

He said his book serves as a manual and a blueprint for city youths to capture success. Though he attended school on a football scholarship, he knew he would not make it to the professionals.

McKoy, who resides in Central Jersey, is hoping his book will help inculcate values that will assist city students to envisage themselves rising above their circumstances, no matter how trying or difficult, to achieve great things.

He attended Wednesday’s school board meeting in which he hand delivered the 5,000 books to the city’s school district.