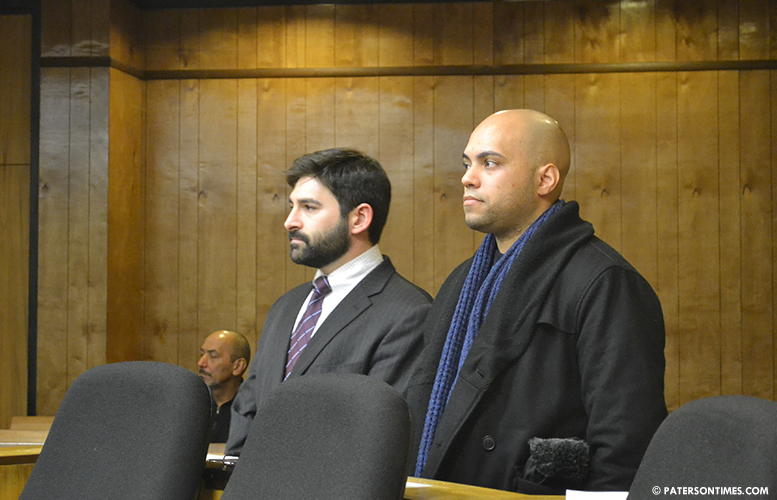 Former auxiliary police officer Jonathan Lopez, who along with another auxiliary officer left the scene of an accident that resulted in the death of a Garfield man, was sentenced to three-year probation and 150 hours of community service on Friday afternoon.

New Jersey superior court judge Adam Jacobs issued the sentence after considering several factors including Lopez’s clean record. He has not had any contact with the criminal justice system, said Jacobs.

The judge also pointed out that Lopez was instrumental to the investigation. Assistant Passaic County Prosecutor Paul DeGroot said Lopez cooperated in the investigation that led to the arrest and conviction of Juan Martinez.

Martinez was sentenced to a five-year prison term for conspiracy to commit official misconduct. Prosecutors charged Lopez with hindering prosecution, a charge he pled guilty to last year.

DeGroot said Lopez (pictured, right with attorney Matt Dourdis, left) testified against Martinez and assisted authorities in figuring out what took place inside the vehicle and the ensuing cover up that followed after the crash took place on April 17th, 2012 on North 1st Street. Martinez, the driver, and Lopez were closely following Waddy’s motorcycle from 100 feet or less, with their vehicle’s emergency siren blaring.

The crash took the life of 31-year-old Randolph Waddy of Garfield. The two auxiliary saw the crash, but did not stop to render aid. And did not report the incident to their superiors.

“I would like to apologize to the victim’s family,” said a remorseful Lopez to the family. “This has been a tragedy in many ways.”

Lopez’s attorney Matt Dourdis said his client was remorseful of the events that transpired that day.

“We needed him. He did what he had to do to cover himself,” said Matthew Warren, brother to Waddy, after the sentencing. “He told the truth on what really happened.”

Prosecutors did not recommend the 150 hours of community service for Lopez, but Jacobs suggested this minutes before the sentencing. The judge said Lopez opted to complete his community service at the Hackensack Hospital.

Jacobs asked Lopez what made him select that specific place for community service; “I like helping people. It’s in me,” said Lopez.