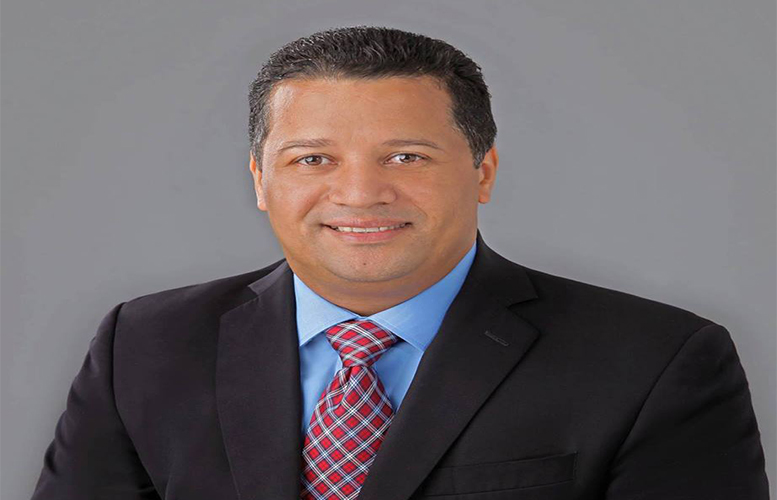 A full-scale dispute has erupted between some Grand Street business owners and former city councilman Rigo Rodriguez over a small strip of loading zone that sits in front of Dayton Auto Parts.

Business owner Michael Jackson, who owns Jacksonville Restaurant, said Rodriguez, who owns the auto parts shop, has been using the loading zone to park his personal vehicle. As a result, Jackson said, other area businesses have been disadvantaged.

Disputed loading zone at the corner of Grand and Mill Streets.

“He’s just mad they towed his car just like they towed my car,” responded Rodriguez to Jackson’s remarks on Sunday morning. The former councilman said he doesn’t park his private vehicle at the loading zone because he knows it will be ticketed and towed, but he said his commercial vehicles often use the space.

Rodriguez said his delivery vehicle, which has commercial license plates, momentarily parks at the loading zone to load parts for delivery. “It’s an auto part so you move in and out within seconds,” said Rodriguez. “You see it there and you pass again, you think they haven’t moved – they move in and out.”

Jackson’s car wasn’t the only vehicle towed from the loading zone, nearby Peking Garden II owner said his vehicle was also targeted. Both suspect Rodriguez leveraged his police contacts from the time he was a reigning councilman to tow their vehicles.

“He could park his own car in the front, and if we park [our] car in the front, he always calls the cops to try to tow it, and that’s not fair,” said Steven Lin, manager of the garden. Lin said Rodriguez’s customers freely park at the loading zone.

Owner of the garden Joe Lin said police quickly respond when Rodriguez calls them, but seldom do when business owners dial. “For some reason when he calls the police show up in not even 30 minutes, it’s like these guys work for him or something,” said the owner.

The garden’s manager said once his vehicle was towed from the loading zone at 7:30 p.m.

“We do not have 24-hour loading zones, we just do not have it,” said Kenneth Morris, councilman at-large, last Tuesday. “It is my understanding that non-commercial vehicles were towed from this loading zone after business hours.”

“There’s quite a bit of loading zones, that’s throughout the city, that don’t have time on it,” said Ruby Cotton, 4th Ward councilwoman. She said often business owners use the loading zones as their private parking spots.

Cotton said she once observed a business owner ordering a resident to move her car from a loading zone at 8 p.m. The councilwoman intervened, she said, and told the owner it’s eight o’clock and the motorist has the freedom to park at the loading zone.

Council members said the city council should review all the loading zone ordinances to ensure they have time restrictions. And if no restrictions exist, then they ought to be added in.

Morris said when non-commercial vehicles are towed after business hours the city opens itself up to liability.

Jackson also mentioned that Rodriguez may have voted to place the loading zone in front of his business. When asked whether he voted on the Mill and Grand Streets loading zone ordinance, Rodriguez replied in the negative. “I did not, I recused myself being that it’s in front of my store,” said the former councilman.

Rodriguez said the loading zone was placed there through an ordinance introduced by former city councilwoman Vera Ames-Garnes.

Jackson urged the council to re-consider every resolution or ordinance Rodriguez sponsored over an election fraud incident that resulted in Rodriguez and his wife agreeing to a lifetime ban on public office and employment.

Council president Julio Tavarez asked the city’s law director Domenick Stampone whether the council has to conduct such a review. “Is everything he voted on during his tenure because of an issue he had subsequent to that — would that then obviate everything he worked on? Absolutely not,” responded Stampone.

Rodriguez said he is open to dialog to resolve the dispute, but Lin, the manager, said when approached for resolution, Rodriguez responds with indifference.

The garden’s owner pointed out that during the mayoral election none of the businesses would display Rodriguez’s campaign posters.

“He’s like the most hated person in this block,” said Lin, the garden’s owner.