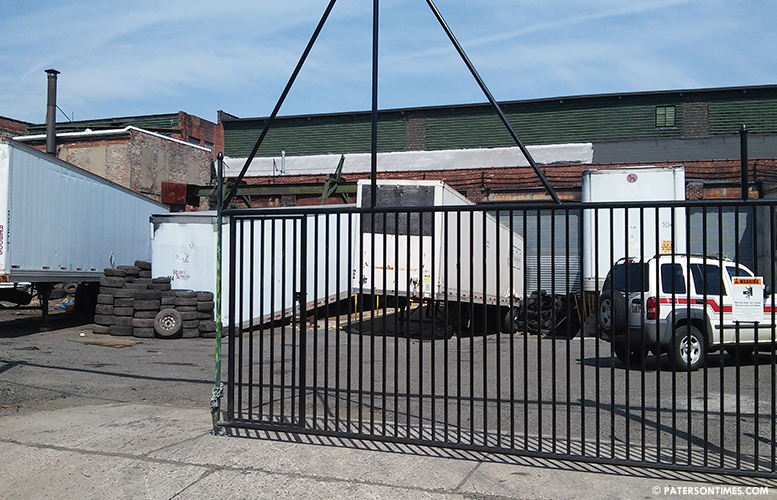 The New Jersey Department of Environmental Protection (NJDEP) dispatched investigators to an industrial building on Shady Street after it was discovered the building – abandoned by a tire recycling business — contained thousands of junk tires that prompted fire officials to setup a 24-hour fire watch.

“DEP has gone out to the sites and we’re investigating,” said Caryn Shinske, spokeswoman for NJDEP, on Wednesday afternoon. She said investigators were on site at the abandoned scrap tire recycling shop on 22-32 6th Avenue (known as 5 Shady Street) that was operated by Full Circle Tire Recycling.

The Shady Street building is presumed to be stuffed with 350,000 tires, according to a confidential source who tipped off city officials that resulted in a fire watch being setup.

That number could not be verified. Shinske said a preliminary investigation did not locate a permit for the Shady Street facility.

“The owner has been taking responsibility for the site, but enforcement actions will be taken in the short term,” said DEP spokesman Bob Considine about the Shady Street location. He said a short term enforcement action means a potential fine or violation being issued to the operator of the business and not the building’s owner.

Fire chief Michael Postorino said the building’s owner has been cooperating with the city to the point of posting a fire inspector at the site 24-hours a day for about two weeks now at his expense to ensure a tire fire does not result due to the large quantities of scrap tires that are inside the building.

Considine pointed out that all power has been cut off to the building subtracting a catalyst for any potential conflagration. He also said there is protection against anyone attempting to enter the building.

Investigators were also on site at the 36 Kentucky Avenue scrap tire storage facility that opened just last month with an eerily similar name: Full Circle Used Tire. “Our inspectors were at the Kentucky Avenue site today and determined there were no issues. All the tires were stored responsibly and they have a permit to have them,” said Considine on Wednesday.

Emily Schneider, owner of the Kentucky Avenue business, said she has little connection to Dave Renta, who is listed as the owner of the Shady Street business. She said her company purchased some clients from Renta and that’s the only connection between the two companies that share such similar names.

Considine said on Thursday that the building’s owner has informed the state that the former tenant has committed to removing all the tires from the building that runs for ten addresses.

Renta could not be reached for comments for this story.

Ruby Cotton, 4th Ward councilwoman, said she is skeptical the state would be able to locate the business owner to issue a fine or violation. “Do you honestly think they can locate him?” asked Cotton.

The Shady Street building does not have a certificate of occupancy (CO), according to an official from the city’s Community Improvement Division. She said a permit was taken out in January for a water connection. Considine said the owner will put in place a sprinkler system.

Cotton said it seems to be common practice for businesses to locate to the city and start operating without obtaining the necessary paperwork like a CO. She said she only found out about the tire stuffed building from a reporter.

By the time the city figures out a business is operating without a CO it’s always too late, said the councilwoman. “There’s a lot of no COs in this city, and it’s getting totally out of control,” said Cotton.

City officials said until the building is cleaned up a fire inspector will remain posted at the site at the owner’s expense. “A determination on a possible enforcement action will be made based on the timeliness of the cleanup,” said Considine. “DEP Solid Waste Compliance and Enforcement is expecting regular progress updates on the removal.”