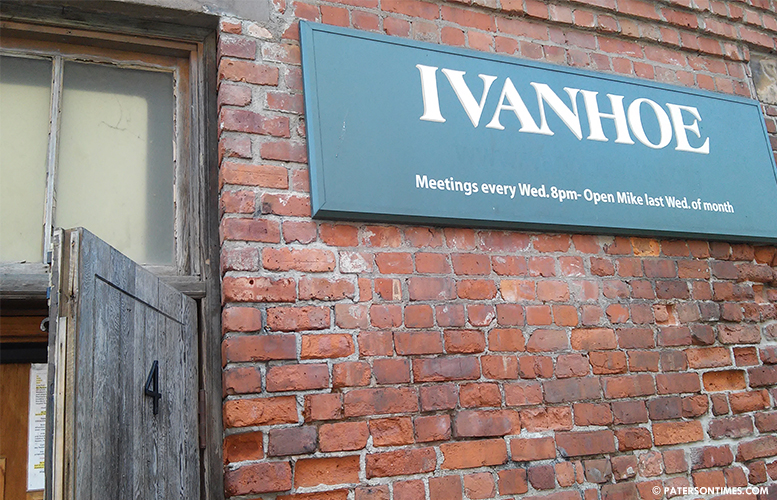 After a landlord-tenant lawsuit in the Passaic County Superior Court, the city has obtained a favorable ruling to evict the Ivanhoe Artists Mosaic from the Ivanhoe Wheelhouse on Spruce Street by the end of May.

The timing of the ruling has members of the art group scrambling to figure out a way to extend their stay at 4 Spruce Street so as to keep it open for visitors during the city’s annual Art Walk, the biggest art event in Northern New Jersey.

Ken Wallo, vice-president of the mosaic, said the group has to vacate the building by May 31st, 2015, two weeks before the annual art event. He said the group made plans for the big event to display five sound sculptures by internationally renowned sculptors Harry Bertoia and his son Val Bertoia.

Wallo said the presence of the Bertoias would likely have brought national press coverage to the city’s art event. He said the event could possibly have made it on the New York Times’ art section.

He is imploring city officials to grant an extension so that the building, which has been a stop annual art event for the past number of years, will not be shuttered. “If their decision is final at least give us until the end of June,” he said. “We understand a ruling is a ruling and it’s their building.”

Council members said they have no problem in granting the group an extra 30 days to vacate the premises. “I don’t have a problem with that,” said Kenneth Morris, councilman at-large, when asked whether the council would be willing to grant the group an extra month.

Mayor Jose “Joey” Torres intends to present a request for proposal (RFP) outlining the scope of services it’s looking for before making a recommendation to the governing body, according to a statement issued by the mayor on Monday afternoon.

Torres’ office did not make him available for comments, but instead provided the above written statement. It’s not clear whether the mayor will agree to a 30 day extension for the group. So far he has been cold to a plan proposed by the mosaic and the city’s Grass Roots Arts Commission (GRAC).

The proposal would turn the building into an office for the GRAC while allowing the mosaic to remain as a resident at the premises. The nine-page plan was submitted to the mayor’s office on April 14th, 2015, three days before the legal ruling.

It would also allow the city’s agency to allow other groups to use the building. Andre Sayegh, 6th Ward councilman, said it makes sense to allow a city agency to control access to the building, so that all outside groups have a fair opportunity to utilize the space.

Morris said the building is city owned and the only way the municipality can ensure every group has access to use the building is by having a city agency manage the premises. He suggested the city’s division of cultural and community affairs take control of the building and serve as the door-keeper for the various art groups.

“No one group should maintain control over a city property,” said Morris.

Wallo’s group fears that a new organization can come in and take over the building including a potentially new group headed by the former executive director of the mosaic. Christine Conforti, who for the longest time has been the face of the mosaic, said she has no such intentions.

“I no longer want to be in the lead of anything. I can’t do that type of work anymore it’s too much for me,” said Conforti. “Change is good,” she said referring to the eviction order. She said she would like to see another more transparent and open group take over the building and open it to the community.

“That’s a beautiful location, and we had a lot of beautiful events. As an artist we got to do a lot of things that we would have never got to do without that free space,” she said.

Lewis Cole, chairman of the GRAC, said he has spoken to the mayor one-on-one. Torres promised to run through the proposal and get back to them, he said. However, two weeks later, neither group has heard anything back from Torres.

The plan to evict the mosaic out of the building began more than a year ago after the current leadership and Conforti’s group engaged in a bitter conflict. The two parties could not settle their differences, so they sought assistance from the council. The intractable nature of the problem forced the council to empty out the building before engaging in any sort of meditation between the two groups.

Both groups struggled over a city owned building. When Torres came to power he adjusted the original plan behind the eviction and added the RFP process.

Council members said they would like to see the building be used to foster arts in the community.

“Urban areas have flourished when you promote the arts: look at Florence, look at Rome, look at ancient Greece,” said Sayegh. He said if the city plans to undergo a renaissance it has to advance the arts and humanities.

“What we need to do at that site, since it is part of the Great Falls Historic Park, is promote the arts,” said Sayegh.