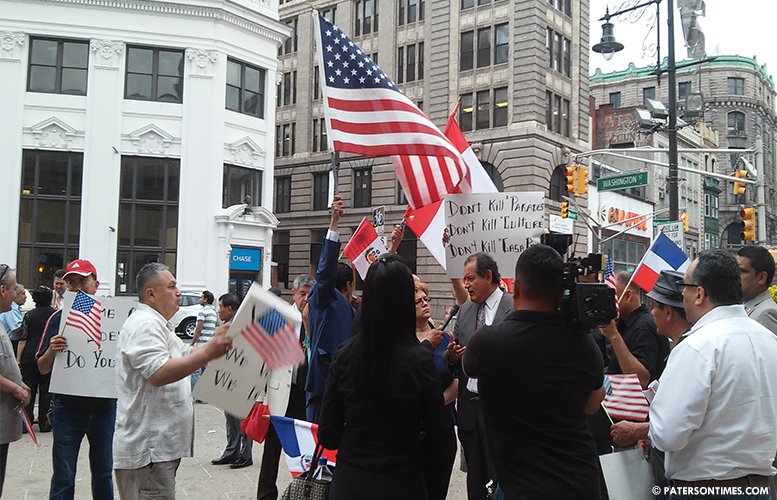 Organizers of the Dominican and the Peruvian parades on Tuesday evening protested the proposed new fees that would force them to shoulder 30-percent of all fees incurred by city police and public works for their annual spectacles.

Roughly two dozen protesters held signs, one of which read, “Don’t kill parades,” “Don’t kill culture,” while moving in circles outside the city hall building minutes before the city council was scheduled to discuss the new proposed fees.

President of the Peruvian parade Carlos Tello strongly oppose the parade fees. His group faces $28,008 in fees or 30-percent of $93,360. He suggested the fee imposition was an attack on the Peruvian culture. “You cannot stop our culture,” said Tello.

Maritza Davila, councilwoman at-large, proposed the city reduce the organizer’s share of the cost to 20-percent in the first year and slowly phase in incremental 10-percent increases during subsequent years until 40-percent is reached.

“The proposal gives us an additional two years to transition us to a meaningful – not 100-percent — contribution,” said William McKoy, 3rd Ward councilman.

Davila clashed with her former political ally Mohammed Akhtaruzzaman, 2nd Ward councilman, who proposed a 10-percent share for the organizers.

“If we had the money, I have no problem [paying],” said Mantilla. With the parade scheduled for September, she said there’s very little time remaining to raise funds to pay the city.

“It’s clearly a burden on such a short notice,” said Andre Sayegh, 6th Ward councilman. “This is not a sufficient grace period.” Some council members suggested the city wave the fee for this year so that the groups have sufficient time to raise money come the next parade season.

“It’s next to impossible for the organizers to come up with 30 to 40-percent,” said Alex Mendez, councilman at-large. He said the city needs to figure out a way to reduce expenses it incurs during parades.

Police director Jerry Speziale said special police can supplement regular police, but not supplant it. “They will defray costs,” said Speziale. He said they can handle spectator control, but not traffic diversion which requires regular police officers.

Sayegh asked if the specials will be prepared and ready for the Peruvian parade, the director replied in the negative. Speziale said the 25 currently going through the process will be undergoing a month of field training in July. They will likely be ready by September, said the director.

Speziale was also asked how those fee figures are calculated by police, he said the city considers length of parade, time, intersection, crowd size, block by block traffic diversion, and other factors to reckon a fee.

City officials want the fees in place before the new fiscal year starts on July 1st, 2015. The state’s Department of Community Affairs (DCA) has been – for three years — demanding the city charge organizers a reasonable fee to offset the burden currently shouldered by taxpayers.

This has led some to complain, the Turkish-American parade managed to hold its event without having to pay a fee. “How are you going to tell me to pay $30,000-$50,000 after three parades bass by?” said Carlos Bruno of the National Council for Puerto Rican Heritage of New Jersey. “Don’t wait till three parades go by to charge.”

Business administrator Nellie Pou said that’s because that parade falls in 2015 fiscal year as opposed to 2016, when the fees will most likely be in place.

Mantilla said the group also helps city residents with funeral cost when they have a death in the family.

Ramirez called the fees “a moratorium on free speech” suggesting the group might take the city to court. He mentioned a 2011 case when the Dominican parade group sued the city when former mayor Jeffery Jones attempted to charge the group $100,000 for security and post-parade clean-up.

The parade fee is nothing new, city officials have been attempting to impose some sort of a fee on organizers, so that taxpayers do not continue to be burdened with clean up and security costs that arise from a spectacle. “The problem was we were never told when,” said Ada Pugh, chairwoman of the African-American parade.