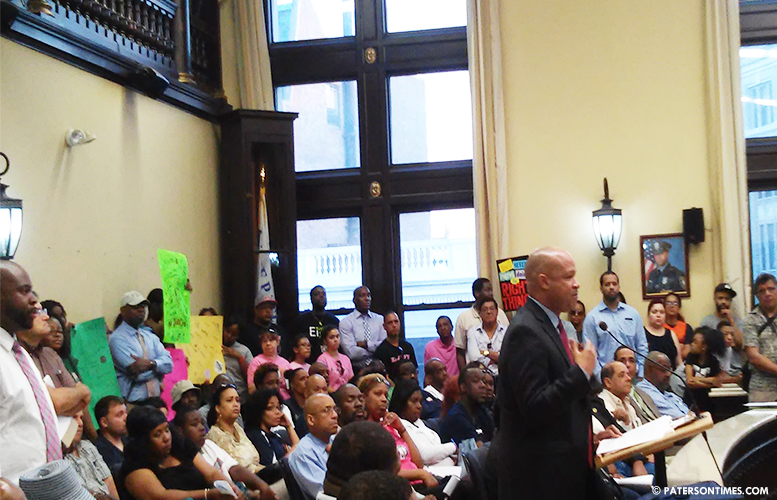 City officials received a large group of demonstrators in city hall on Tuesday evening as coaches, parents, and a number of young children demanded the city provide more recreation funding to keep youngsters away from trouble during the summer months.

The assemblyman called on city officials to fund the city’s evening center program to 1998 levels. He held up a three-page list of names of people who went through the city’s recreation program to do great things including famed football player Victor Cruz, Newark school principal Gemar Mills, and attorney Kenyatta Stewart.

“I can’t believe in 2015, we’re fighting over the budget to save the future of Paterson, New Jersey,” said pastor William Cash of Life Changing Word Church International in Haledon. The city council chamber was packed with residents who later held a demonstration outside the city hall building.

Wimberly connected lack of recreation programs to street violence that has been plaguing the city. Just in the last few weeks, a 15-year-old was murdered in a shooting outside a liquor store on Rosa Parks Boulevard.

When youth lack recreation they will be often be “raising hell” on the streets, said Stewart. He said kids need recreational opportunities.

“There are people in Paterson that are not going to let what’s going on in Paterson continue,” said Stewart, who has often represents perpetrator and victims of street violence in court. Eastside High School principal Zatiti Moody echoed Wimberly’s call and urged city officials to invest in young people.

The group of about 100 demonstrators appeared to demand a larger allotment of funds for recreation programs in next year’s city budget.

The speeches though sounded as if the city had or is planning to cut recreation funding, said Kenneth Morris, councilman at-large.

“I’m unaware of any cuts in recreation budget,” said said Morris. He asked business administrator Nellie Pou if there were cuts. She responded mayor Jose “Joey” Torres’ administration did not cut recreation budget despite a news story last year that said the city diverted recreation funds to pave city streets.

Pou said the administration does not anticipate on cutting recreation spending.

“I don’t think any council member will support any cuts in recreation,” said Morris. He said he does not want to be accused of cutting programs for city youths.

Morris said putting $585,000 into the recreation budget will not be an easy task. Wimberly’s letter to the mayor and city council members requests half-million dollars to bring recreation funding to the same level it was 17 years ago. The mayor has yet to receive the letter, according to Torres office.

Torres’ could not comment without seeing the actual letter, said his secretary.

Recreation programs provide city youngsters with summer employment and a place to be after school and during the summer instead of lingering on the street. Wimberly, who has been recreation director for 16 years, said recreation budget has been chipped away at by just about every administration after mayor Martin Barnes.

City council president Julio Tavarez scheduled a discussion on recreation funding for the city’s next workshop meeting scheduled for May 19th, 2015 at 6:30 p.m.