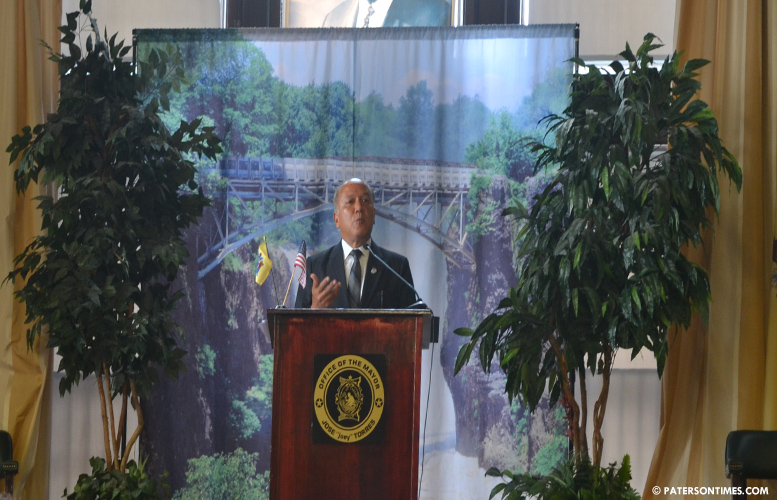 In his first state of the city address on Wednesday afternoon, Mayor Jose “Joey” Torres highlighted his achievements of the past year while laying out a grand vision for Paterson’s future.

Torres’ vision includes the revival of an old idea: light rail system that will run through Haledon bettering the city’s public transportation infrastructure. “This will have significant impact on the city of Paterson,” said the mayor.

The mayor’s vision also includes adding plows to garbage trucks for efficient snow removal, an expanded recycling facility at the soon-to-be-built salt dome on Montgomery Street, the utilization of the hydroelectric generating plant at the foot of the Great Falls to power the greater Great Falls Historic District, remediation of the Paterson Armory on Market Street to put to use the long neglected structure, and open an early childhood center at the Heritage at Alexander Hamilton.

Torres said the hydro plant at the falls will create a 100-percent black out proof zone that will include the Great Falls National Park, John F. Kennedy High School, and International High School.

The mayor also said through a land bank program, which will hold foreclosed properties obtained by the city through the court process to sell on the market, will create a $30 million housing trust fund run job training programs and to revitalize city neighborhoods.

With blight and public safety going hand in hand, Torres also wants up the tobacco purchasing age to 21. He also wants to regulate hours of operation for liquor establishments after the city is welcomed into the first-class cities category following the passage of a state legislation.

The mayor also owned that there will be some challenges moving the city forward. He cited the sewer system upgrade which is expected to cost $1 billion. He said just the initial plan will cost $30 million.
“I believe my administration believes in Paterson,” said Torres. He said his goal is to further good governance and ensure a prosperous future for the city. Torres touted crime reduction saying homicide and shootings are down nearly 50-percent. He also said crime in hotspots have been cut by 72-percent.

Four of the city’s nine council members attended the mayor’s speech. Council president William McKoy, 3rd Ward councilman, said, “I think it was very bold in terms of recasting the opportunity to invest in Paterson and see a path forward.”

McKoy called the speech “visionary.” He said it shows there’s a plan to move the city forward.

“I think the mayor painted a very clear picture of the city going forward,” said McKoy.

Ruby Cotton, 4th Ward councilman, said she was pleased with the speech especially at the attention the mayor paid to her ward.

Cotton was happy to hear about a plan to re-create a new School 6 that will serve as the harbinger of better things to come in her crime-plagued ward. She also applauded the mayor for his re-entry program, re-organization of the Paterson Pride program, and a proposal to expand recycling at the salt dome facility.

“I like what they’re doing with the salt dome with recycling,” said Cotton.

“With this administration at least there is a target,” remarked Kenneth Morris, councilman at-large. Morris described the speech as “insightful” and “informative.”

Morris said there wasn’t anything new in his accomplishments list that raised suspicion. He said mayor has gotten much better at delegating than in the past. Torres has often been characterized as a micromanager.

Torres finished his speech on an optimistic note. “Although the city has a history of struggles, we have an even longer history of success and splendor,” said the mayor.