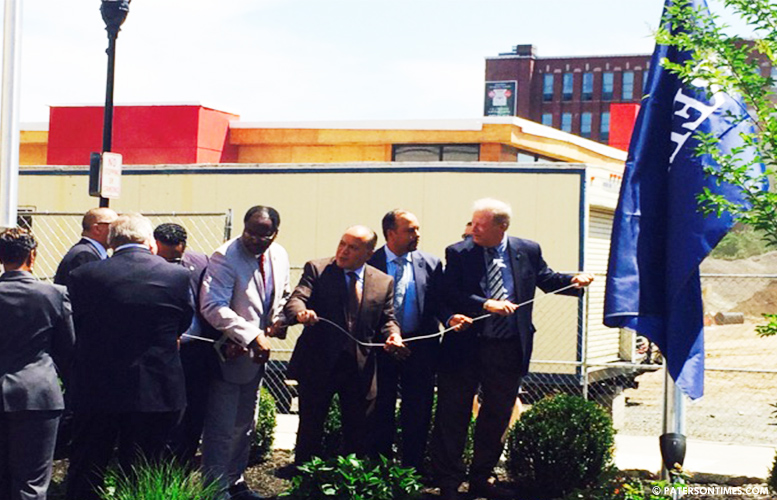 A navy blue flag bearing a golden lantern and the word “freedom” was hoisted above the Underground Railroad monument on Broadway by local leaders on Thursday morning to honor white spice merchant Josiah Huntoon and black engineer William Van Rensalier for running a safe house that allowed fugitive slaves from the south find freedom in the north.

“The single word “Freedom” written in large white letters, represents the promise of the American constitution, and the courage of all those who risked their lives seeking freedom,” explained Ron Van Rensalier, great-grandson of abolitionist Van Rensalier. “A golden lantern represents the lantern lit in the Huntoon house tower which signaled when it was safe for the slaves to enter the house.”

The flag is a testament Huntoon and Van Rensalier commitment to freedom. The flag’s navy blue background represents the slaves’ long and dark journey out of bondage, according to the Huntoon-Van Rensalier Underground Railroad Foundation.

The “freedom” flag at the monument to the right of the American flag.

Huntoon and Van Rensalier worked at the very site where their statues and the freedom flag now hangs to deliver runaway slaves to freedom. “Their story speaks of the ardent belief that every human being has,” said mayor Jose “Joey” Torres, an inalienable right to “freedom.”

“It is a source of great pride to know that Paterson was a part of this story and this legacy,” said Torres.

The mayor, council president William McKoy, and other elected officials raised the flag following a ceremony attended by roughly 40 people at 125 Broadway.

Erik Lenander, great-grandson of Huntoon, discussed how the partnership between himself and Ron Van Rensalier in the Underground Railroad Foundation was similar to their great-great grandfather’s friendship in that they had to rely on each other in their mission to take their families’ “legacies and go beyond the boundaries of [Paterson] to fulfill the dream that Huntoon and Van Rensalier had” namely, equality for all.

Dolores Van Rensalier, great-granddaughter of Van Rensalier, remarked on the recent controversy surrounding the Confederacy’s flag. “The demeaning symbolism of the Confederate flag has been brought down,” she said in a statement on Wednesday. “The message of freedom, which our UGRR flag represents, is more powerful than bondage and oppression will ever be.”

Dolores Van Rensalier said the ceremony also honored those who donated bricks that are placed on the ground in front of the bronze monument of Huntoon and Van Rensalier. “For many future generations, each of you is leaving a priceless legacy for all to see—long after we are gone,” she said in a statement.

After the flags raising, which included the New Jersey and the American flag, was finished, Paterson Parking Authority director Tony Perez concluded the ceremony aptly capturing the history being honored at the site and the essence of America itself.

“We might have come here on different ships, but we are on the same boat now,” remarked Perez.