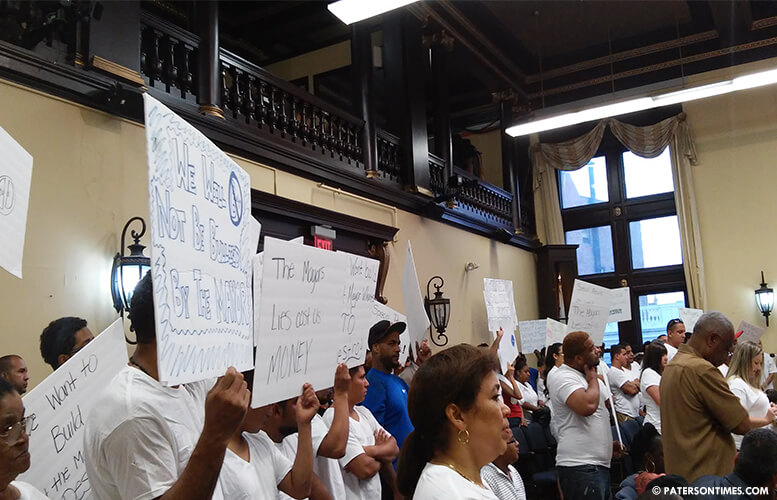 “The mayors [sic] lies cost us money,” read one sign held by the protesters. Another read, “We want to build, the mayor wants to destroy.” And a third read, “We will not be bullied by the mayor.”

Paperwork submitted to the city mysteriously go missing and developers are put on a loop, said Magdalena Rijo, a protester, who identified herself as a local business owner.

“We see a lot of bumpy roads in the process,” added Jesus Izaguiree, a construction worker. He accused the city of favoring some developers by fast tracking their applications while others are hampered by delays.

The protesters blamed Torres for not keeping his promise, made in April, to re-organize and improve the permit issuing division. They also blamed Alex Mendez, councilman at-large, for promising a fix, but delivering nothing.

At times the crowd grew restless and noisy resulting in council president William McKoy ordering them to calm. Rijo and Izaguiree took swipes at Torres and Mendez.

Rijo feared Torres, who she described as “vindictive,” will likely retaliate against her business for speaking out.

Torres did not respond to call for comment on Wednesday.

McKoy told the protesters to make known their issues rather than attack the mayor or council members. Mendez attempted to address the protesters, but they turned, and exited the council chambers as the councilman was speaking.

Julio Tavarez, 5th Ward councilman, applauded the protester. He said the city is opening itself up to liabilities if it is speeding up some applications while slowing others as alleged by the protesters. “The solution is simple: treat everyone justly,” said Tavarez. “If there’s a delay everyone gets a delay.”

Business administrator Nellie Pou said the delays experienced by developers resulted from high turnover in the division as well as the untimely death of two of its employees in June. She said some also left for higher paying jobs elsewhere.

The division is “awfully understaffed,” added Kenneth Morris, councilman at-large. He said the city needs to look for ways to issue permits faster. He suggested increasing rates for permits to better staff the department.

Morris also suggested using outside contractors for code enforcement. Delayed building inspection was another issue citied by the protesters.

Two employees are being hired at the end of the month, said the business administrator.

The protest appeared to be connected to Ridgefield Park developer Charles Florio, said insiders. Florio has sued the city over for charging him in excess of $60,000 using the abandoned properties ordinance and the city’s refusal to grant certificate of occupancy to certain renovated buildings of his.

Florio was in attendance at the protest, but did not speak.

Andre Sayegh, 6th Ward councilman, said council members created the Economic Development Department to streamline building applications and to speed up development in the city. He suggested Torres’ administration is doing little to speed up the permitting process.

“We gave them the tools,” said Sayegh.