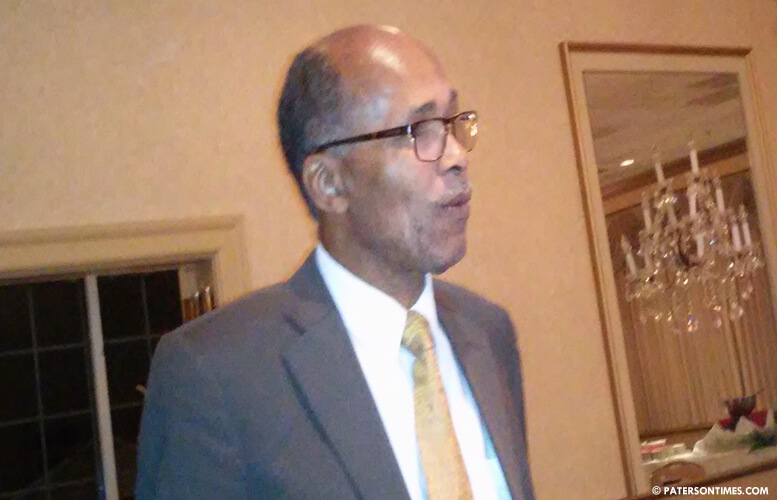 As he seeks his fourth term on the city’s board of education, Errol Kerr received significant endorsements from Paterson community leaders during his campaign fundraiser at the La Neve’s Restaurant on Thursday evening.

Assemblyman Benjie Wimberly, who dashed from his Hackensack football practice to make it to Kerr’s event, described him as a “level headed” voice with a wealth of knowledge on the board of education.

“He will stand on the principle, even when that principle hurts his personal situation, and that’s where you find true leadership and true dedication,” said council president William McKoy. “Someone that’s going to do what’s right for our children, this district, and do it in a way that we can all be proud of.”

“I worked alongside this man when I first got elected,” said assemblywoman Shavonda Sumter. She described him as a man of integrity who makes the city’s children, residents, and schools his top priority. “We can’t afford to have people who don’t care,” said Sumter.

“He’s a man of his word,” said Andre Sayegh, 6th Ward councilman, as he read off a list of Kerr’s feats. “And more importantly he’s a man of action.”

Some of Kerr’s action included the establishment of the city’s high-achieving Gifted and Talented Academy, said the school board member. Under his watch the district’s audit findings, which was 40 or more when he first took office in 2006, has diminished to no more than a handful, said Kerr.

A native of costal Jamaican city of Montego Bay, Kerr said he also established the parent recognition breakfast which is in its 5th year.

School board members Lilisa Mimms and Corey Teague both endorsed Kerr. Teague emceed the event admittedly touting his own candidacy for the school board on November 3rd, 2015.

Incumbent Manny Martinez is not seeking re-election to the school board this year. The school board member is seeking to capture the 1st Ward city council seat vacated by disgraced former councilman Anthony Davis.

“Education is too important to be politicized,” remarked Moody remembering the board of education election change from April to November.

Despite his criticism of the change Moody extended his endorsement to Teague who voted in the affirmative to change the elections from April to November. Other speakers also endorsed Teague during the event.

“Unfortunately where we are today in Paterson’s political environment ability, talent, knowledge, integrity, all of those that we used to see as assets, are no longer necessarily electable characteristics,” said McKoy. “We have come to identify with ethnic politics, friendships, and who looks like whom.”

Velez said Kerr should be supported by city residents who care for their children’s education. The longtime school board member is rarity in a city where the board of education is used as a stepping stone for higher offices.

McKoy described Kerr as a humble man who has difficulty “tooting his own horn.” Although unaccustomed to gloating, Kerr has no problems pointing out the defects in other candidates.

“We have people running in this election who have not been to a board meeting in the last year or so,” said Kerr. In fact, none of the challenger frequented school board meetings in the past year — Castro attended Wednesday’s workshop meeting.

Kerr suggested a candidate who has not attended board meetings in the past year, he or she is very likely ill-informed of what has been taking place at the district.

At one point Kerr said he thought the last election in 2012 when he narrowly won re-election by beating Arleen Barcenas by 26 votes would be his run. “I’m going to give it another try and I’m asking for your support” he told a room of about 75 people.

“I serve because I have a penchant and an interest in the development of our young people in this city. I’m purposeful in this mission,” said Kerr. “And I will be purposeful to this mission until I cannot do it any longer.”