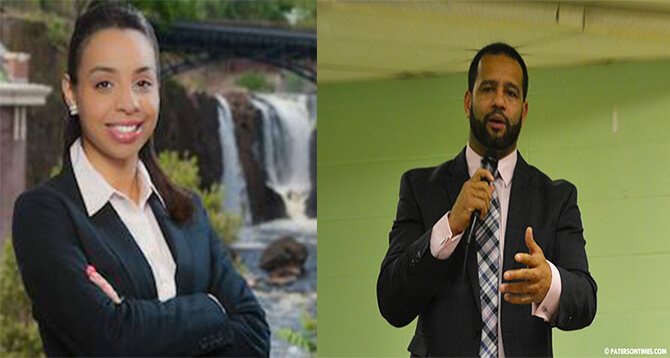 Two candidates for the city’s 1st Ward special election staged small rallies at the televised city council meeting on Tuesday evening in hopes of drumming up support for their respective campaigns.

Candidates Michael Jackson and Veronica Ovalles led their campaign t-shirt clad supporters into the council chambers for miniature political rallies. Each had roughly two-dozen supporters behind them as they took to the podium to introduce and share a brief biography of themselves rather than outline specific policies.

“I pursued my education despite facing many environmental obstacles,” began Ovalles as she shared the challenges she faced in obtaining a college education. She said she attended school while raising three children. First at the Passaic County Community College to earn an associate degree and later at Montclair State University for a bachelor’s degree.

Ovalles, whose most recent employment was as an executive marketer for a spa, said she lived in the city for 10 years on Redwood Avenue. She briefly mentioned the various issues she plans to champion among them recreation, park improvements, youth employment, and the potential restoration of the flooded 1st Ward library.

Business owner Jackson, who runs the Jacksonville Restaurant, focused his attention on the violence that’s been common place in many 1st Ward streets.

“The city of Paterson has refused to restore this library or suggest any possible new library for our ward,” said Ovalles intermittently pausing between speech, for five days ago she gave birth to a 4th child, a boy. She said the shuttered library which closed after hurricane Irene inundated the northern quarters of the city in 2011 is neglected to such a degree that tall weed and rodents are ubiquitous in its rear yard.

Ovalles said it’s been four years and the city should work on a permanent library for the 1st Ward. When told the city’s public library system created a small makeshift library at the Christopher Hope Center on Temple Street.

Ovalles, who is a mix of Cuban and Dominican ancestry, responded, “This is what we deserve?”

Ovalles’s white shirted supporters crowded the council chambers and even attempted to affix a large campaign banner on the rear wall of the chamber to the displeasure of council president William McKoy.

McKoy told the supporters to not affix the sign to the wall, but allowed them to continue holding the sign which served as backgrounds for speakers, and received television exposure.

After Ovalles spoke Jackson who made a bold promise to voters.  I pledge the proceeds of my council salary back to the community, said the businessman. “I’m not here to get a pay check,” he said. “I’m here to bring forth change in our ward.”

Jackson said he will give out the $41,000 council salary to organizations wishing to do good in the Silk City.

Unlike Ovalles, Jackson has experienced the rough and tumble landscape of city politics when he ran for an at-large seat in the 2014 municipal elections. The business owner came close to clinching a victory in that race.

The cloud of that bitter campaign remained with Jackson on Tuesday evening. “There’s been many who tried to discredit me or discredit my commitment,” he said referring to the attacks he was subjected to last time around for defaulting on a $140,000 loan he obtained from the Paterson Restoration Corporation which assists some city businesses to grow through low-interest loans.

“There have been some who tried to point out some challenges I may have had businessly [sic] here,” said Jackson. “Those who had tried to do that. I say to you ‘I’m still here.’”