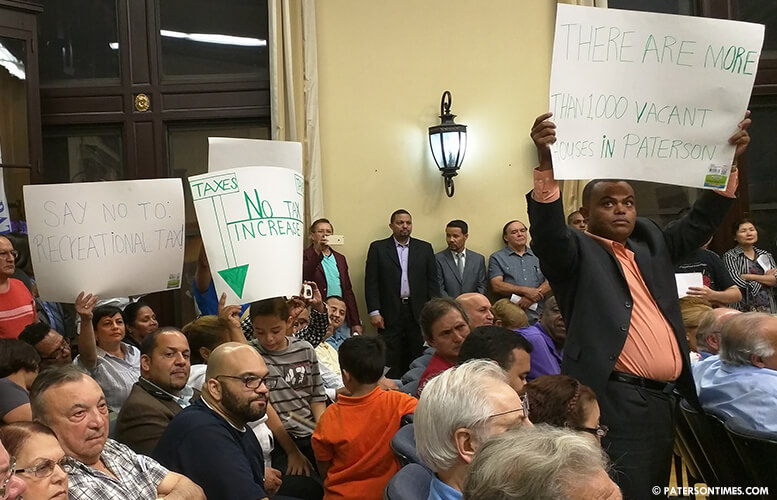 The city’s property owners who experienced dramatic increases in their year-end tax bills protested before the city council during Tuesday evening’s deliberations.

Approximately 300 taxpayers gathered inside the council chambers seeking relief from increases that many said will result in them losing their business or home. “If this doesn’t change soon we will have to close,” business owner Anna Villalongo told council members.

Villalongo, who does not own the building of her Washington Street business, felt the tax increase as a result of the property owner passing on a portion of the cost to each of the building’ tenants.

The taxes increased on her tiny store front by four times the previous amount she was paying, said Villalongo.

Irwin Bailey, who owns a commercial building in the corner of Main Street and Broadway, said his taxes sky rocketed from $16,000 a quarter to $43,000.

Howard Zhuang, whose father owns a building on Broadway and East 33rd Street, saw their quarterly tax clime from about $8,000 to $38,000. “Those are some incredible numbers,” remarked council president William McKoy when Zhuang read out the increase.

Zhuang showed his father’s tax bill that verified the amount.

Similarly, Dain Lee, who represents Villalongo’s landlord, predicted an exodus of businesses from the city’s downtown. He predicted the small store fronts that dot Washington Street across the street from the historic city hall building will be vacant.

Richard Song speaking for his parents who placed a great bet in purchasing the property in downtown said: “This was supposed to be their nest egg,” a source of income for retirement, that’s changed due to the large tax bills.

The large tax bills stemmed from a combination of a higher tax rate – 4.108-percent — and new assessed property values – city’s tax base fell from $8.2 billion to $5.75 billion — that shifted the tax burden more towards commercial properties whose assessments remained steady or increased.

The municipality also had to use the new assessed values to bill taxpayers retroactively from January of this year which resulted in higher tax bills in 3rd and 4th quarters as many have to pay the difference of 1st and 2nd quarter bills.

Haytham Younes, business owner, cried foul, stating that the tax levy was struck in August, yet the city is applying it to bills that were already paid prior to that point. He compared it to the state increasing its sales tax in middle of the year and forcing him to pay that rate retroactively for a purchase he made at the beginning of the year.

“You have no idea how hard it is to retain businesses in Paterson,” said Bailey, who is one of the founding members of the Downtown Special Improvement District. He is also a member of the Greater Paterson Chamber of Commerce.

Bailey predicted an exodus of businesses from the downtown business corridor. Villalongo said this could result in a “domino effect” in which business after business will either shut down or relocate elsewhere.

The city’s tax assessor Richard Marra has been telling property owners to pay for this year’s bills and appeal next year. He said many, who saw their new assessments prior to the increases, did not appeal with the county tax board.

Last year 7,500 property owners filed tax appeals, said Marra. This year 1,500 did. Marra was booed by the large crowd of protesters who carried signs that read: “No more taxes,” and “No tax increase,” and “Say no to recreational tax.”

Marra and business administrator Nellie Pou said the city’s 24,000 taxpayers will receive a question and answer letter that will further explain the tax bills. He gave yet another presentation for the audience.

“We can’t afford to pay!” yelled out an audience member when Marra suggested they pay and file tax appeals next year.

Many taxpayers also complained about the short period in which they must come up with a large amount of money. Mohammed Akhtaruzzaman, 2nd Ward councilman, suggested a grace period for the 4th quarter bills.

Pou said state law requires the city to collect the taxes within the tax year. She also said extending a grace period will simply further push the date closer to the next tax bill due date still resulting in taxpayers coming up with two quarters worth of tax in a short period of time.

“We don’t want to lose our properties,” read another sign. Tuesday’s protest brought out a number of commercial property owners, but also included homeowners.

Margaret Knudsen, a condo owner, whose taxes have gone up by $3,000, said “The city is doomed.” She criticized mayor Jose “Joey” Torres for taking leave the same week the tax bills hit the mail box for many homeowners.

“He jumps to Vegas when the tax bills go out,” said Knudsen.

“We’re going to have less and less homeowners because we’re pushing people out of the city,” added Alex Mendez, councilman at-large. “With this tax increase we’re going to shut the city down.”

Mendez voted against a tax levy that adjusted the city’s tax rate from 2.90 to 4.06-percent despite warning it would result in a shutdown of government services.

McKoy rebuffed Mendez’s comments saying without the new tax levy the city would have no funds to run government.

“You’re trying to take something they don’t have,” remarked Sami Merhi, a Passaic County freeholder candidate, who said he had properties in the city.