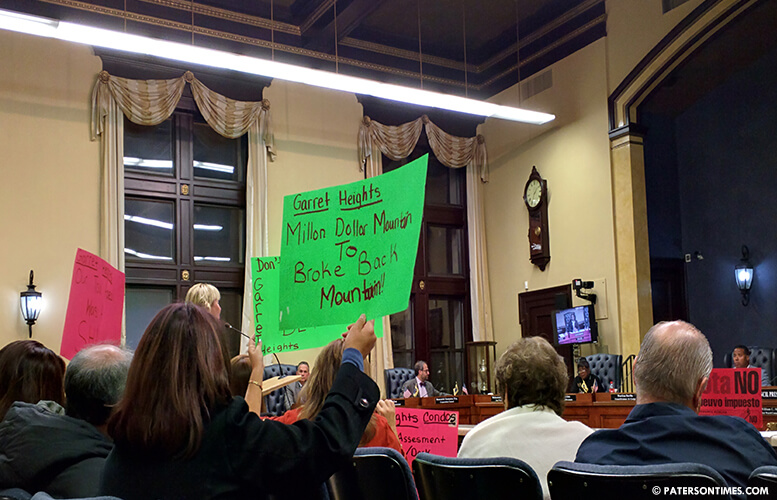 More than a dozen city residents continued their protest against the third and fourth quarter tax increases that resulted from a higher tax rate and the retroactive implementation of new property assessments.

Some raised questions about the accuracy of the new assessment values. “It’s laughable what you did,” said Toni Harvey, a city resident, to a representative from Appraisal Systems, the company that conducted the revaluation.

Harvey said her small condominium was exaggeratedly assessed at $291,100.  “There is no one on this earth that is going to buy my condo in Paterson at $291,000 which your company assessed it at.”

Harvey thought the assessments were done inaccurately. She said no company representatives, who were conducting in-person appraisals, visited to assess her property.

“We made three attempts to visit each and every property,” said Rick Del Guercio, principal of Appraisal Systems. He said the company was not able to get into 20-percent of the properties in the city.

Del Guercio said the company managed access to 80-percent of the homes.

Del Guercio said company representatives visited properties and in cases where they were not able to gain access they left tickets after several tries indicating the assessment value. He said that ticket had a phone number a property owner could call to discuss their new assessed value.

Council president William McKoy suggested the company meet with pockets of dissatisfied taxpayers and demonstrate to them how their assessed values were derived. Del Guercio said a potential arrangement could be made to meet with taxpayers.

Kenneth Morris, councilman at-large, pointed out a potential arrangement is code word for it will cost the city.

McKoy drew an analogy to a plumber who installed a boiler at his property that was leaking. He said the plumber was called in a second time and the issue was addressed. He thought the company should meet with the taxpayers without charging the city extra.

The company held informal meetings with property owners at Paterson Museum after the revaluation was completed giving homeowners a chance to contest their assessed values.

Mohammed Akhtaruzzaman, 2nd Ward councilman, suggested the company re-do the assessments on properties that saw their assessments increase by 15-percent or more.

Del Guercio noted a drastic decline in the number of annual tax appeals the city witnessed compared to last year.

Del Guercio said most of the properties that filed successful appeals were commercial properties. He noted 500 of the appeals filed this year were residential properties. He said it’s typical to see tax appeals even after fair market values have been established through a citywide revaluation.

Del Guercio faced an angry crowd of city taxpayers who questioned the methods the company used to assess city properties. The city invited the company to attend Tuesday evening’s meeting to explain the revaluation after a large number of property owners protested high taxes in third and fourth quarter.

The tax increase — in the thousands — in the third and fourth quarters resulted from a combination of the application of the new assessments and an adjustment in the tax rate from 2.9-percent to 4.108-percent, according to city officials.

Many taxpayers are being forced to make up for underpaying taxes in the first and second quarters after the new assessments were implemented retroactively. The taxes will normalize in the first quarter of next year.