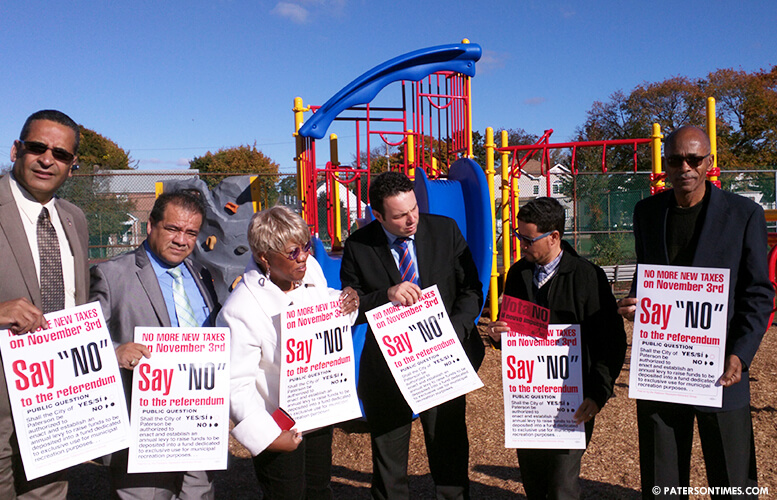 Mayor Jose “Joey” Torres’ was handed a devastating defeat at the polls on Tuesday when voters rejected his proposal to increases taxes to fund recreation leading many opponents of his recreation levy to rejoice.

Torres ran a failed campaign to convince voters to support raising $3 million from property owners to fund recreation. 72-percent of voters rejected Torres’ proposal to extract an additional 6¢ from $100 of assessment amounting to an annual tax increase of $115 for an average property assessed at $192,000. Only 28-percent of voters favored the mayor’s new tax.

“This was a referendum on Joey Torres,” said Andre Sayegh, 6th Ward councilman, who led the fight to prevent the passage of the recreation tax ballot question.

“The fact that it was a resounding rejection of his recreation tax speaks volumes on his absentee leadership,” said Sayegh. “Instead of going to Las Vegas, Colombia, and the Poconos in the span of three weeks he should have been here listening to the heart wrenching stories of Paterson taxpayers who are struggling to pay their bills.”

Torres, who did not respond to a message or a call for comment, said he had “no comments,” when questioned at city hall on Wednesday evening.

Another councilman who vehemently opposed Torres’ recreation tax was Alex Mendez, councilman at-large, who hit the stump again to tell voters to say no to the new tax.

“The community spoke loud and clear,” said Mendez. “Our home owners they are struggling in the city.” The city needs to look elsewhere to find the money to fund recreation, he said.

Mendez said he didn’t think it wise to constantly dig into the taxpayers pocket for more and more revenue.

Sayegh and Mendez did not defeat the new tax on their own. Community organizations like the Eastside Neighborhood Association and the Paterson Taxpayers Advocates also opposed the new levy.

“”People spoke. We knew that was going to happen. You’re not going to take away money from the people who already have no money,” said Miguel Diaz, president of the Eastside Neighborhood Association. “To anybody that supports taxes — we’re not supporting them. That’s it.”

Diaz and the neighborhood group campaigned hard against the new levy. Many Eastside section residents saw their taxes spike after the city-wide property revaluation.

“It’s a big victory for taxpayers,” said Alson Goow, former three-term councilman, who now heads the Paterson Taxpayers Advocates. “They’re sending a strong message to Torres that they had enough.”

Goow has gone door to door to get the vote out against the new tax.

Goow predicted a movement against Torres as a result of yesterday’s poll defeat. The mayor’s close supporters thought the measure was half-heartedly pushed by those who wanted it approved in the first place.

Torres struggled to re-brand the tax levy in the weeks leading up to the election as non-binding, as being a solution to restoring the historic Hinchliffe Stadium, and as a replacement for the recreation budget line item.

As he attempted to make the new tax more saleable the mayor invariably alienated the measure’s original supporters by stating it would replace the existing budget line item for recreation which is $2.5 million rather than boost it to $5 million as he initially proposed.

He pulled a bait and switch, said Sayegh.

The mayor’s revisions were prompted by numerous protests that emerged from large tax bills that went out in late September. The large tax bills stemmed from a combination of tax rate change and the retroactive application of the new property assessments.