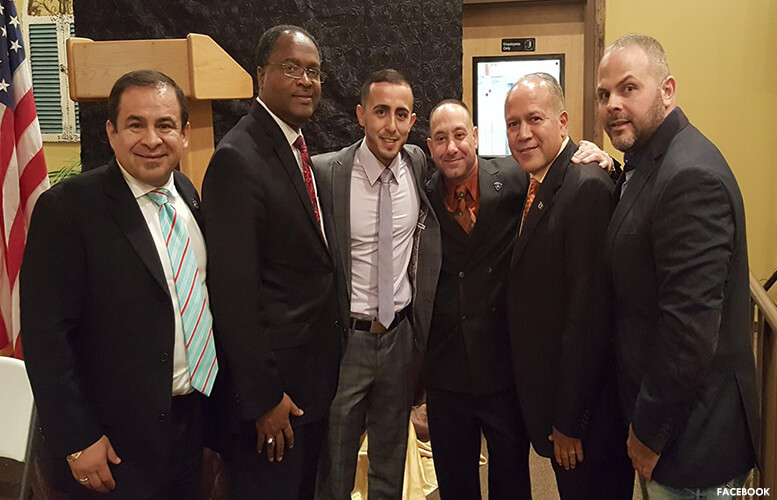 With more than six months to go before next year’s municipal elections, the fight for the 6th Ward council seat has already begun. Two men – incumbent Andre Sayegh and Al Abdelaziz– are expected engage in a grueling battle to represent the southern portion of the city.

Abdelaziz is already proving to be a tough opponent: he raised $65,000 to $70,000 at a campaign kick-off last week at the Syraan Restaurant attracting a sizable crowd. He also secured the support of several of Sayegh’s bitter foes.

“This is my choice,” said mayor Jose “Joey” Torres raising Abdelaziz’s arm in the air like a referee announcing the victor of a wrestling match.

“This is your choice!” Torres dictated to the crowd of more than 300. The mayor has said he intends to back a slate of candidates in next year’s election when all six wards will be up for grabs.

Torres’ maneuver, made public in the summer, alienated many on the city council. Council members brushed off the mayor’s overt political move to stack the governing body with his henchmen.

The first objective of the slate appears to be to rid the council of Sayegh, who has been a bitter enemy of the mayor. The 6th Ward councilman has defied Torres at every turn following the 2014 defeat.

Defiance paid off for Sayegh who successfully got out the vote to deliver a devastating defeat to Torres earlier in the month. Torres’ recreation tax, which the mayor expended great energies to sell to residents, was rejected by 72-percent of voters.

Voters rebuked the mayor’s policies, according to political analysts, a year and half after about 36-percent of them elected Torres to a third-term. Torres’ close supporters acknowledged the mayor had been badly bruised, but blamed other backers of the recreation plebiscite for half-heartedly supporting the measure.

Torres’ tacit support of school board member Manny Martinez also did not bear fruit. Martinez suffered a great defeat at the hand of restaurant owner Michael Jackson. Many have said Martinez’s close ties to the mayor and his support for Torres’ recreation tax contributed to his defeat.

An endorsement from an incumbent mayor, who taxpayers have blamed for spikes in property taxes that resulted from a recent revaluation, is likely to do more harm than good for Abdelaziz’s nascent campaign for the 6th Ward council seat, according to multiple local politics watchers who cite the recent ballot defeats.

Without disavowing Torres’ support, Abdelaziz said he is running his own campaign. “I’m my own candidate,” he said.

Sayegh dismissed the criticism stating he is running for re-election on a record of strong results. Some of the councilman’s close friends attended Abdelaziz’s campaign launch. The councilman said he couldn’t preclude them from attending the event.

Abdelaziz worked on Sayegh’s abortive mayoral campaign where he befriended a number of the councilman’s key supporters many of whom will have to make the hard choice of who to back in May 2016.

Sayegh said he will raise money as well, but noted in local elections money is seldom the winning factor. He said he wasn’t too concerned about the large sum of money Abdelaziz raised in a single night.

Sayegh has $14,000 in his campaign account, according to latest campaign filings. His opponent has more than four times that amount.

Abdelaziz has yet to file reports with the New Jersey Election Law Enforcement Commission (NJ ELEC). He said he will file them in January. The filings will show the sources of the funds he raised last week.

Council president William McKoy, Passaic County freeholder Theodore “TJ” Best, and the imam Mohammad Qatanani of the Passaic County Islamic Center expressed their support for Abdelaziz at the gathering, said those who attended the event.

Sayegh, who voted in favor of making McKoy the council president in the summer, has not been on friendly terms with the 3rd Ward councilman.

Abdelaziz in the past months managed to conduct a series of podium campaign raids at the city council meetings against Sayegh.

In the most recent episode, Abdelaziz went before the podium to deliver a verbal attack. Sayegh attempted to respond, but was cut off by the council president, leading to Julio Tavarez, 5th Ward councilman, crying foul.

Sayegh was later given time by McKoy to respond to Abdelaziz’s remarks. Insiders have said the podium raids at televised meetings by Abdelaziz is a strategy devised by Torres’ close supporters to discompose the councilman.

The popular imam’s support appeared to raise some concerns for Sayegh. The councilman said he has delivered results in public safety and parking issues for the Islamic center. He thought endorsements should be made based on merit.

Abdelaziz, an educator who works at the Passaic County Technical Institute, said he was happy with the large turnout at his launch event. He and others have said the restaurant was packed with supporters.