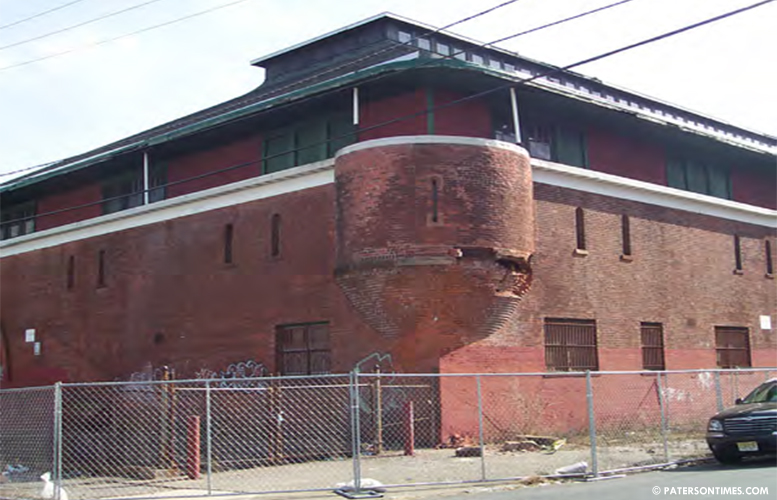 The city plans to borrow $1.1 million to cover the emergency partial demolition cost of the Paterson Armory and create architectural documents to pave the way for development at the remnant of the burnt historic structure, according to city officials.

The administration section of the building, which faces Market Street and measures 153 ft by 48 ft, will be preserved for future development for housing or office space, according to a plan approved by the city council on Tuesday night.

Cost to develop that portion of the building is about $1.4 million, according to officials. Wayne-based Vecharello Contracting was hired soon after a fire ravaged the building in early November to demolish the entire structure for $795,000; however, the city then decided to salvage a piece of the building by partially demolishing it.

The preservation piece has increased the demolition and building securing costs to $1.1 million, according to city records. “For an additional cost of little over $290,000 we get to save part of the armory and preserve the history of the building itself,” said Kenneth Morris, councilman at-large.

The council ratified a $780,000 revised contract with the demolition company and appropriated additional funds for asbestos removal and architectural services.

Council president William McKoy thought the developer should take on the architectural expenses while the city should clean up the asbestos inside the city owned building. He looked at $100,000 set aside for architectural services including design and bidding documents.

“Why would we project that so far out when we’re not even sure what’s going to be there, and that all may be provided by the developer that’s selected to do the construction,” said McKoy. “I’d think a developer would want to have maximum flexibility in designing or rehabilitating the building to a future use.”

Gianfranco Archimede, director of the city’s historic preservation commission, said the city may develop what remains of the building for municipal offices. He said having design and bidding documents make that process much easier.

$780,000 was awarded to Vecharello Contracting after scope of work was changed from full demolition to partial demotion and stabilization of the building’s remain. Stabilization includes closing the building up with wood panels, removing bird droppings from the upper floors, and removing the burned martials from the building among other things, said Archimede.

The city obtained three quotes from demolition companies prior to awarding the contract, according to city records. East Hanover-based Caravella Demolition submitted a $1.4 million quote while Wayne-based J.R. Contracting wanted to do the work for $2.8 million — Vecharello Contracting was the least expensive out of the three, according to city records.

Many have raised questions about the quick awarding of the contract and emergency demolition. Others have wondered how the fire began in the building which has been vacant since the 1980s, according to officials.

The fire which began in the basement and spread throughout the building is being investigated by the Passaic County Prosecutor’s Office.

Business administrator Nellie Pou said the city intends to borrow money to pay for the demolition and stabilization of the building. The city has been under considerable financial distress due to ever dwindling tax base. “It’s our intention to bond for the $1.1 million emergency demolition of the armory,” she said.