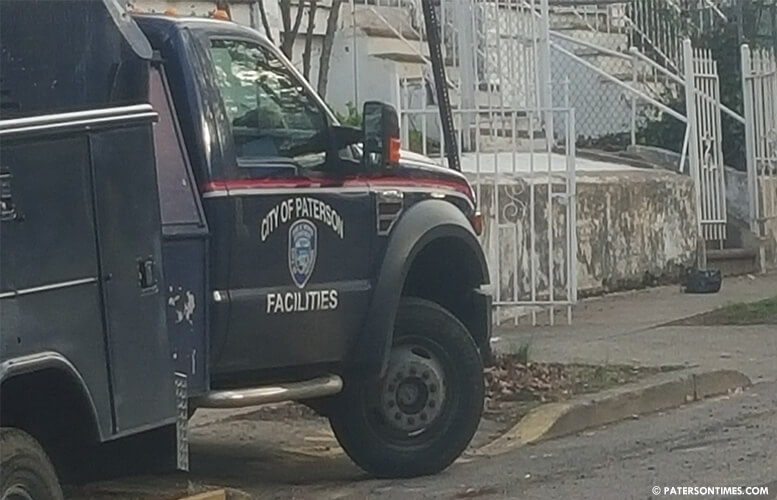 The city’s public works employees have been rehabilitating a church-owned Montgomery Street building for the past week in which mayor Jose “Joey” Torres intends to locate his prisoner re-entry program.

The use of city workers to handle the rehabilitation of a private property has garnered criticism from city council members and an activist. “How are we upgrading a private property we have no title to?” asked community activist Ernest Rucker.

On Monday morning, about seven workers with city equipment and vehicles, were at the site, handling electrical and building works. Public works director Manual Ojeda did not respond to a call as to why his employees were working at the building owned by Grace Gospel Church of Paterson.

Kenneth Morris, councilman at-large, said the city workers may be working there on their own time as independent contractors. When told of the five public works trucks parked outside of the location and being used by the workers, he said, “They can’t be using city trucks,” he said.

The council has not approved any agreement with the church. It’s not clear whether an agreement is in the works between the church and the city. The city’s law director Domenick Stampone could not immediately be reached for comments on Tuesday morning.

“Wouldn’t the church be responsible to hire a contractor to do the work?” asked Andre Sayegh, 6th Ward councilman. He said he did not think it “appropriate” for city employees to be working on the building. “Taxpayer money should not be funding that,” he said.

“Oh, Lord. That’s not how it’s supposed to be. That building is owned by the church,” said Ruby Cotton, 4th Ward councilwoman, who represents the area where the building is located.

Rucker said he saw the public works employees working at the site during the weekend suggesting the city might have to pay overtime. He said if city workers are injured while rehabbing the property city taxpayers will be on the hook for workers compensation.

The city has set-aside $180,000 in federal funding for the re-entry program dubbed the “Center of Hope.” The program is an expansion of a successful re-entry program run by former governor James McGreevey out of Jersey City called Martin’s Place.

The state earlier in the year earmarked $3.5 million to the New Jersey Reentry Corporation for the expansion of McGreevey’s program to Paterson and elsewhere, according to news reports.

The city’s re-entry program will serve Passaic County residents coming out of the county jail. Torres wants to use housing vouchers to settle inmates in various locations around the city as part of the program. Others participating in the program would stay at the Eva’s Village housing for the needy. The program would be run out of 147 Montgomery Street.

Torres did not return a call for comment on his cellphone. A message left at his office on Monday went unanswered.