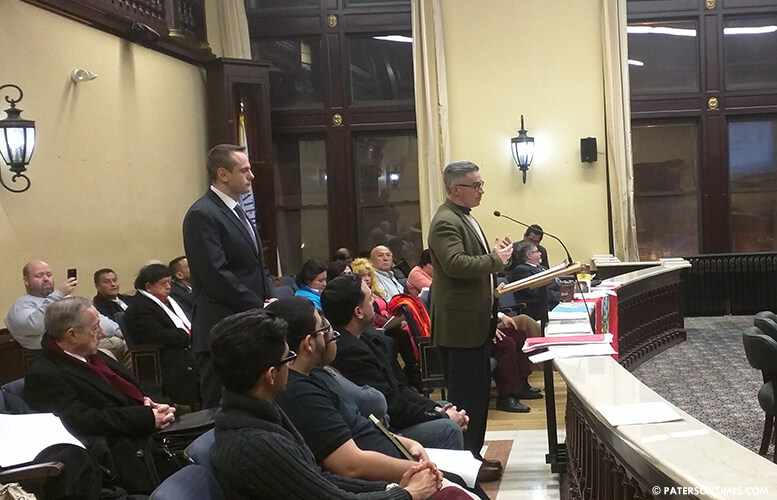 Former New Jersey governor Jim McGreevey took to the podium at the city council meeting on Tuesday evening to defend the city’s soon-to-open reentry program which has garnered great deal of controversy over the past week.

“These are people interested in changing their lives and having second chances,” McGreevey told council members. He cited the work of Martin’s Place in Jersey City stating recidivism rate for those who went through his program in Hudson County was 22-percent.

The former governor said employment rate at his reentry program stands at 62-percent.

McGreevey’s appearance follows a week of controversy over the rehabilitation of a church owned property and the location of the city’s reentry program.

Mayor Jose “Joey” Torres has received criticism for using public works employees to work on the two-story home locate at 147 Montgomery Street to house the program. He earned great censure from residents for locating a building in their midst without informing them.

The former governor has been aggressively pushing to get the reentry program going to meet federal Second Chance Act grant guidelines. “We need to demonstrate we’ve moved forward,” he said. He expects the program to open in mid-January.

John Koufos, executive director of the New Jersey Reentry Corporation, reckoned the program will kick off with $750,000. The funds will cover personnel and case managers for the “Center of Hope,” said McGreevey,

The city has an $180,000 federal grant for the program earmarked for the Grace Gospel Church of Paterson which owns the property on Montgomery Street.

Housing referral, employment training, job placement, addiction referral, legal services, and counseling are some of what will be offered at the one-stop shop for those who are attempting to rebuild their lives after a jail stint.

“We spend $45,000 to lock somebody up in jail. For a fraction of that cost with housing, addiction support we can change people’s lives,” said McGreevey.

55 attorneys from the New Jersey Bar Association will assist ex-offenders in clearing old warrants that could quickly put them behind bar. Some warrants go as far as a decade, said Koufos and McGreevey.

“They are coming out of prison with nothing. Now, they need to get re-established. Sometimes people don’t need to do what they do, but they do it, and they feel sorry later on,” said Ruby Cotton, 4th Ward councilwoman, in whose area the reentry program is being located.

Cotton said she has received many complaints from neighborhood residents who oppose the program being located in their area. She said many thought it was an overnight stay for ex-offenders or a halfway house.

“This is not a residential program,” said the former governor dispelling the rumors. He said the program will operate during business hours.

McGreevey said he has met with some of the neighbors and plans to schedule other meetings to meet with area residents. He said the reentry program will strengthen the neighborhood adding the program will hold clean ups and other community events.

Milagros Mercado, who has been living on Montgomery Street for nearly two decades, opposes the location of the reentry program on her block.

After hearing McGreevey’s speech she said, “Everything sounds good, but the location is not good.”