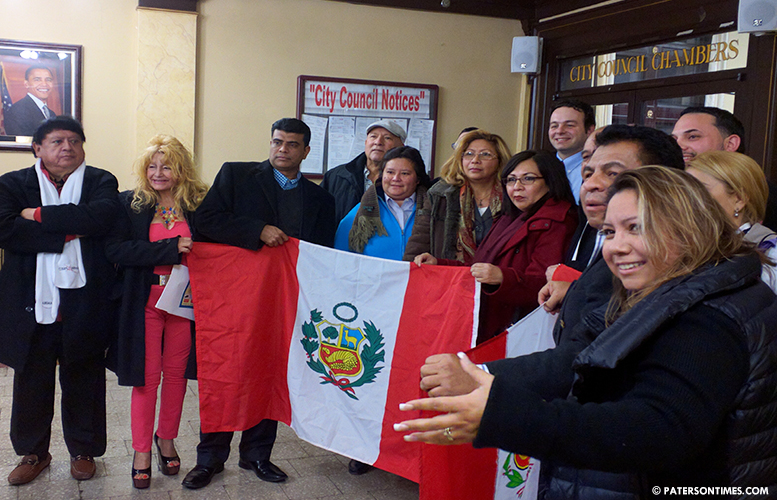 The city’s Peruvian-American community has collected petitions to rename a portion of Market Street between Mill and Main Streets to Peru Boulevard to celebrate their heritage in the Silk City.

Many of those who are pushing to have the section of Market Street to be also known as Peru Boulevard after the South American country demonstrated with a large Peruvian flag at the city council meeting on Tuesday evening.

Nelly Celi, who helped collect a number of signatures at the behest of the street naming committee, said the street renaming matter has been going on since September of last year. Many expected to see a measure on the agenda, but instead saw a discussion of the proposal at the council.

“Peruvians have been established here since the 1950s,” said Celi. She said many have raised their families and children in the city. Market Street between Mill and Main Streets is dotted with Peruvian-American owned businesses.

Kenneth Morris, councilman at-large, who is the chairman of the street naming committee, said he did not see the petitions until it was presented to council members on Tuesday night. The organizers of the renaming met with the committee, but were told to poll the area businesses to determine whether there was sufficient support for renaming a portion of one of the city’s major thoroughfares.

Celi was surprised the committee did not receive the petitions. She said the 30-50 petitions were handed in to Mohammed Akhtaruzzaman, 2nd Ward councilman.

Akhtaruzzaman said he provided a copy to Morris. “It could have been a breakdown in communication somewhere,” said Celi.

Maritza Davila, councilwoman at-large, who is also the first Peruvian-American member on the council, was visibly displeased the petitions were handed in to Akhtaruzzaman, whose ward has a large Peruvian-American community.

Akhtaruzzaman and Davila, once close political allies, have fallen out.

Davila said she still supports the measure. She said she had promised to work on getting that section of Market Street renamed after she was elected to office. She also wants the street to be renamed Peru Lane rather than Peru Boulevard, according to some of the demonstrators.

“I’m looking forward to the ribbon cutting. My father has been here for 50 years. This is one of the things he’ll love to see,” said Davila.

Many other council members expressed support for the renaming.

Michael Jackson, 1st Ward councilman, in whose ward the area is located, said the measure has his support.

Akhtaruzzaman wanted to place the item on the next regular meeting, but was told by council president William McKoy the measure has to follow the usual council process and go through the committee before being placed on the agenda for a vote.

Morris said a committee meeting will be scheduled to move the street renaming measure forward.