Violent and property crimes in the city dropped by more than four-percent in 2015 from the year prior, according to crime statistics.

The biggest drop was recorded in homicides which dropped by 27-percent from 26 a year prior to 19 in 2015, according to crime data. 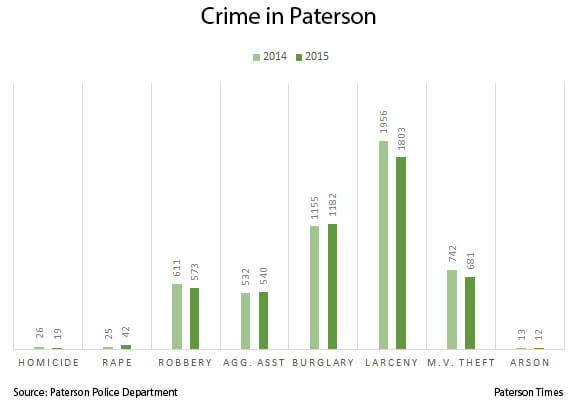 Police reported robberies dropped to 573 from 611 a year prior. Rape is up from 25 to 42 in 2015. Aggravated assault has also slightly climbed to 540 from 532, according to the uniform crime report.

Police director Jerry Speziale said the homicide number is at its lowest in a decade. He said the overall 4.1-percent reduction would have been greater, but the definition change in rape almost doubled that number.

“I think people are talking more to the police,” said Ruby Cotton, 4th Ward councilwoman. She said more residents are utilizing anonymous tip lines to report those who commit crimes.

The director said more people have been providing information to police. He said his more than yearlong legitimacy building campaign in toughest neighborhoods are bearing fruit.

“What legitimacy does is it creates trust between the police and the community. When they see us as legitimate they work with us, they heed to our authority, and they partner with us,” said the director.

Cotton said organizations like the Street Keepers have been speaking to young men on street corners to dissuade them from engaging in violence. Several organizations and influential city residents brokered a truce between two groups which resulted in a somewhat peaceful summer last year.

Kenyatta Stewart, a local attorney, who assisted in brokering that truce, had said the spike in violence after the summer, did not indicate the truce was broken. He said it’s likely two other factions are engaged in some sort of a feud.

Akhtaruzzaman said the police director is setting up the foundation to get a hold of crime in the Silk City.

Cotton said many neighborhood associations in her ward have been reporting suspicious individuals. She said the community policing unit has helped build trust between neighborhood residents and the police department.

Speziale said he is optimistic the downward trend will continue into 2016. He said there are a small number of bad actors who are committing majority of the crime.

“Yes, we’ve had a spike in shooting. As long as we get a handle of it, it will remove those responsible. We’ll make sure they face the stiffest justice possible,” said Speziale.