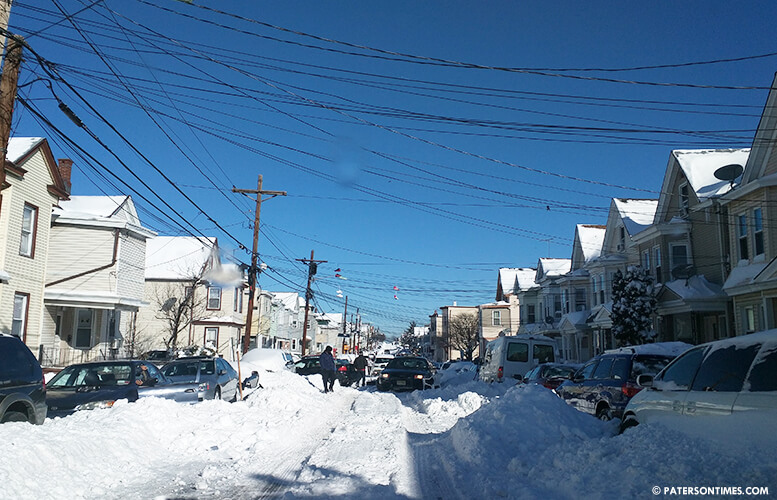 Two days after a powerful snowstorm passed through the city, a number of municipal roads remain impassable, according to residents and council members.

“Right now, we have trucks out taking care of all the side streets,” said Steve Howe, deputy public works director, on Monday morning. He said the impassable streets are a result of residents digging out their vehicles and illegally throwing the snow on to the roadways.

Howe said five trucks are out clearing the streets. “We cleared the side streets last night,” he said. He said when many residents dug out their cars this morning they ended up dumping the snow on the roads.

“We’ll be out there for the rest of the day,” said Howe.

“They are saying they cleaned it, but there’s a lot of snow,” said Mohammed Akhtaruzzaman, 2nd Ward councilman. “I couldn’t spot any plows yesterday.” He said some of the streets in his ward remain filled with snow.

A four-by-four truck attempting to make its way from McBride Avenue towards Grand Street via Henderson Street struggled to make passage due to the large amount of snow on the road. The truck’s wheel spun in the snow as the driver repeatedly attempted to free his vehicle from the mire.

Even tractor trailers have been stuck on city roads, according to witnesses. More than a dozen police officers have had their interceptors get stuck in the treacherous roads on Saturday, Sunday, and Monday morning, according to residents.

Mendez said he did not believe the impassable roads are a result of residents throwing snow back into the roadways. He said residents are doing the same on county roads, but those roads are passable.

Council president William McKoy said the city had 26 inches of snow presenting public works employees with an arduous task with antiquated equipment. “It was a challenge for us and the equipment we have,” he said

McKoy said he suspects the city’s public works unit that is tasked to clear the streets after a snow fall is inadequately staffed and lacks good equipment. Some of the public works equipment are more than 20 years old, according to municipal officials.

Mendez called for a council hearing to figure out what went wrong. McKoy said he did not receive a request for hearing from Mendez.

Maritza Davila, councilwoman at-large, who serves as the chairwoman of the council’s public works committee, did not respond to a call for comment. Mendez is also on the committee.

“This is unacceptable,” said Akhtaruzzaman.

“There’s room for improvement particularly in some of the side streets,” added Andre Sayegh, 6th Ward councilman.

Al Abdelaziz, a 6th Ward resident who is running against Sayegh, said a private plow truck was used to clean up some of the streets in the southern part of the city. He said a group of residents led by him cleared the parking areas near the curb and also plowed some of the roads.

McKoy said the city needs to better equip its public works department. He also suggested the city utilize per diem workers in the event of large scale events like the weekend’s snowstorm to avoid manpower shortage.

Howe said the city has activated one of its emergency contractors Montana Construction for snow removal. The council president said he witnessed trucks removing snow out of the downtown commercial business district.

As for the illegal snow throwers. Howe said there are public works inspectors on the road since this morning looking for violators to ticket. He said the city has ample salt this time around and it also used brine as a pre-salting measure during the storm.

“We have help coming. It’s going to in the 40s for the next few days,” said the deputy director. He is hoping the combination of warm temperature, sunlight, and salt will melt the snow making way for clear roadways.

Raina Walker, a city resident, said no plow came down her road on Sunday. She said a truck came through Tyler Street on Monday afternoon. Many like Walker have been complaining about the roads since yesterday.

“Every time it snows it’s like we have to beg for service on this block,” said Walker.