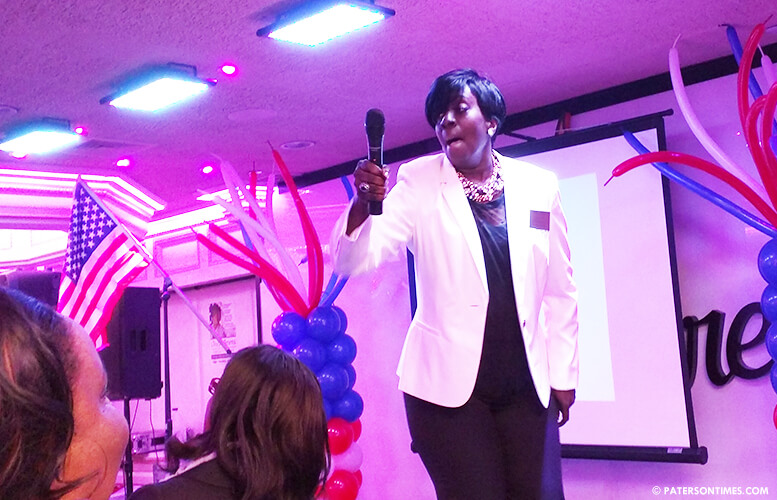 “Mr. Bill McKoy you are officially stamped expired,” roared Mimms inside a room packed with approximately 200 supporters at the Bonfire Mofongo House as the projector screen behind her switched to a picture of the incumbent councilman with the word “expired” in red letters stamped on his image. “When something is expired that means it’s time to be taken off the shelf. It’s time to be taken out of the seat.”

McKoy struck back describing her characterization as “sophomoric” and “gutter behavior.” The council president said, “I would recommend she grow up.” He suggested she focus on issues rather than issuing attacks.

“This is the age of Donald Trumps,” said McKoy. He thought it low to name call in an election when the focus should be on substantive issues.

Mimms also blamed the councilman for the poorly plowed streets following a powerful snow storm that dropped more than two feet of snow on the roads. She particularly picked on a video the councilman posted on his social media page as the storm arrived on Saturday of last week urging city residents to avoid the treacherous streets.

“He was standing over there in the snow and showing our great he was as the councilperson. Meanwhile we’re in our houses, cannot go to work, our kids cannot go to the school for two days because the streets were not plowed properly,” said Mimms.

McKoy said the video was posted on Sunday advising residents to avoid hurling snow back on to the street and stay off the roads to allow city workers to clear the roads.

Some of the city’s side streets were impassable after the snowstorm. In an interview two days after the snowstorm, the councilman said public works employees did a “good job” with the antiquated equipment. He also said the city should invest in good equipment when expecting high quality service.

McKoy proposed a massive investment in public works to purchase better equipment and expand the department through shared services agreements to generate revenue for the municipality when mayor Jose “Joey” Torres presented a plan to borrow $35 million to repair 170 primary roads.

Torres gave priority to the neglected and damaged roads reasoning without good infrastructure investors would loath to come into the Silk City to invest their money.

Mimms said she recently went on a listening tour to hear about issues residents are most concerned about. Al Mingo, 60, 3rd Ward resident, said he was mostly concerned about his taxes increasing every year while he sees less and less services.

“All they do is raise my taxes,” said Mingo. He also complained McKoy did not show up to a block meeting that he and others hosted.

“I don’t want to be another councilperson people don’t see,” Mimms told her supporters.

McKoy said the meeting was hosted during the day. “I wasn’t able to make the meeting because I was at work. I didn’t have a day off,” he said.

Mimms said crime, taxes, and poor roads topped the issues residents are concerned about. She said potholes were a major problem for residents that were not being addressed.

Under Torres’ $37 million road reconstruction project the 3rd Ward will see more roads resurfaced than any other wards. 36 roads will be reconstructed in the 3rd Ward, according to city records.

“I may not have the most exulted title,” said McKoy taking a dig at Mimm’s title as apostle, “but I’m a worker. I’m committed. I’m qualified. And I know what it is to serve.”

Mimms likely raised more than $10,000 in yesterday’s fundraiser prior to accounting for courtesy tickets and paying the catering place. Tickets for her campaign launch went for $60 each.

McKoy, the longest serving member of the council, said he is not worried about candidates seeking to oust him. He said he has a solid record on which he will make his case for a fifth term.

Mimms is a formidable opponent, according to political strategists. She finished second with 3,250 votes in the November 4th, 2014 eight-person school board race. McKoy many have said is a tough incumbent to beat. Political strategists point out the beating he gave ambitious Alex Mendez in the 2012 municipal election effectively delaying his ascension to the council by two years.

“I hope to meet her at the debates,” said McKoy.

Correction (January 30th, 2016): A previous version of this report erroneously noted councilman McKoy’s video was published on Saturday when in fact it was posted on Sunday.