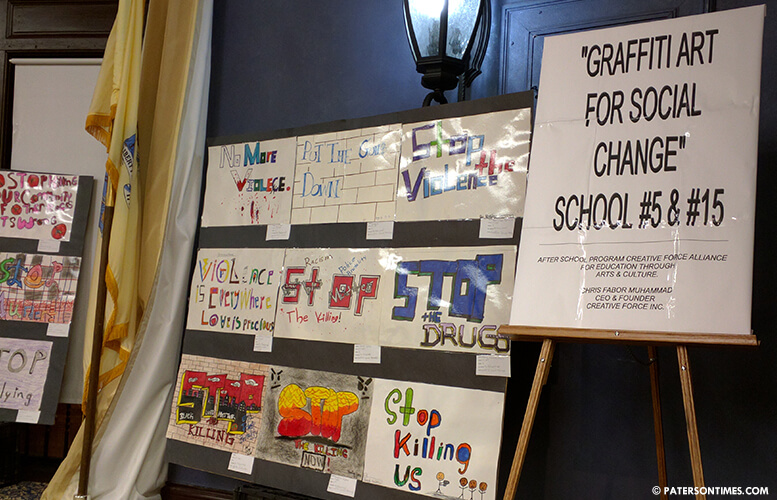 “End robbery,” “Violence is not the answer,” and “Bring peace to the world,” are just some of the messages promoted in almost three dozen graffiti artworks completed by students of School 15 and 5 that are on display inside the city council chamber.

“The art is on a vanguard of social change,” said Muhammad. “Artists are the ones that shape and mold the culture and the social behavior of the people.”

Muhammad’s students did not just focus exclusively on messages of anti-violence, the works also encourage people to recycle and keep their city clean. The messages are also expressed in multiple languages. He said the students were allowed to express themselves in the language which made them most comfortable; English, Spanish, Bengali, and Arabic were some of the languages students used for their messages.

“It’s a diverse representation of this beautiful city of Paterson,” said the teacher. He said the 33 artworks were completed by students in grades 4-6.

Muhammad, who works at School 16, has been teaching art to city students for the past 15 years. He and his students received much praise from council members chamber walls will be graced by the paintings for the next month.

Muhammad said he started the art program at School 15 after funding cuts to the arts at the school.

“We have to start talking more about the arts,” said Ruby Cotton, 4th Ward councilwoman, who praised the students for their work. She said the state doles out millions of dollars to support the arts, but the city sees very little of that money.

The students’ artwork focuses on the numerous ills that plague the city: gun violence, violent crime, littered streets, and dumping.

“This is a wonderful thing. A lot of the times, we don’t pay attention to the youth because they are not old enough to vote, but their voices need to be heard,” said Muhammad.