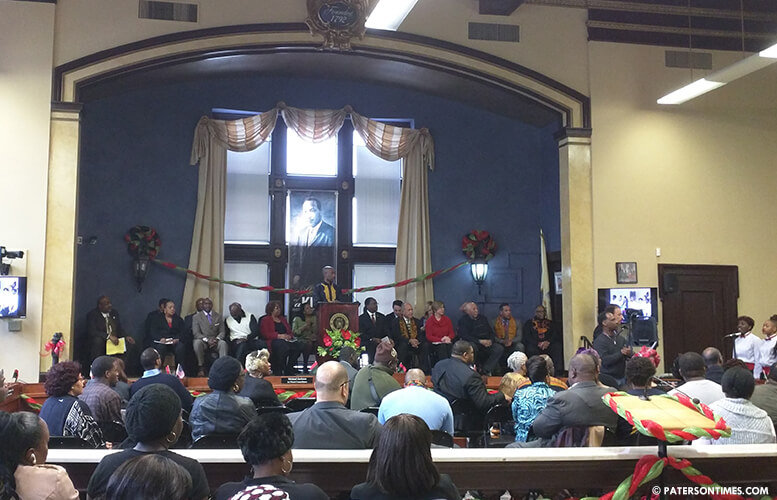 The city began its month long celebration of black history by recognizing seven African-American residents for their contributions to the Silk City on Monday afternoon right after hoisting the red, black, and green Afro-American flag outside the City Hall building.

“This year marks the nation’s 90th year as we celebrate black history month,” said mayor Jose “Joey” Torres as he read off the names of pioneering African-Americans who played important roles in American history. “Paterson has taken great pride in our own African-American men and women who have overcome insurmountable obstacles and achieved great success.”

The mayor expanded the list of honorees by adding two new awards. One named after Barnes and another named after slain police officer Tyrone Franklin.

Roger Grier was recognized with the Martin G. Barnes Award for his work in feeding the homeless through Paterson Cares, a nonprofit.

Police sergeants Dalton Price and Sharon Easton of the community policing division were recognized with the Tyrone Franklin Award.

“If you don’t know who you are, you don’t know where you’re going,” said Torres as he looked at the back of the council chambers decorated with the important accomplishments of African-Americans like W.E.B. Du Bois, Harriet Tubman, Thurgood Marshall, Ralph Ellison,  and George Washington Carver.

“Sometimes we have our legacy and history right here in front of us,” said council president William McKoy as he spotted Benjamin Leak sitting in front of him. Leak was tasked with protecting Martin Luther King Jr. when he visited a Paterson church in 1968.

“His job was to make sure nothing happened in Paterson. And he did his job well,” said McKoy. Brother Leak is a living part of our history, he said.

Over a hundred people attended the ceremony which began with a flag raising at noon before moving into the council chambers for the award ceremony. The ceremony featured music from the Rosa Parks High School choir led by director John Chapman.

“We must never forget the struggles our families went through for us to be here,” said councilwoman Ruby Cotton, who represents the historically African-American 4th Ward.