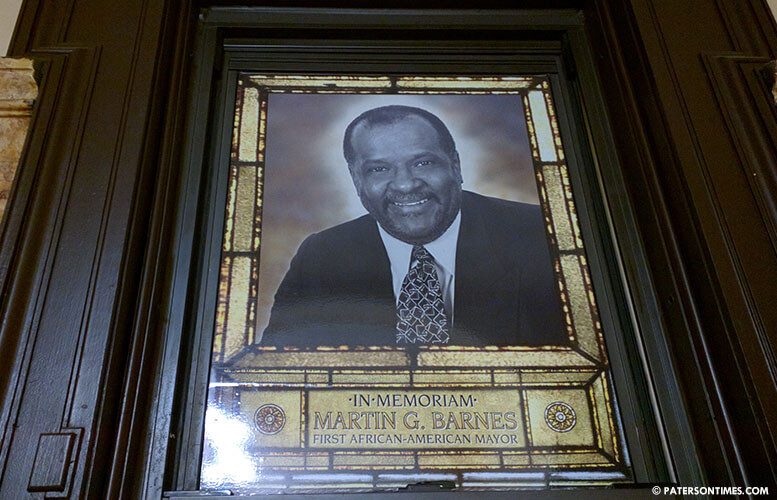 “We will commission a stained glass window in memory and honor of the first African-American mayor of Paterson,” said Torres announcing the memorial piece to be installed on the window of the historic City Hall building.

Torres received cheers from the audience that packed the council chamber on Monday in observation of Black History Month.

McKoy said Barnes was an effective leader and a “man of the people.”

“It’s fitting,” added assemblyman Benjie Wimberly when asked about his take on honoring the former mayor.

When asked whether the city should honor someone who betrayed the public’s trust, McKoy said: “All of us are frail human beings with clay feet.”

Barnes pleaded guilty to mail fraud and tax evasion, according to federal records. He also admitted he took free trips, home improvements, swimming pool and much more from city vendors. Barnes, who came into office in 1997 succeeding then mayor Bill Pascrell, took $200,000 in bribes and inducements from contractors.

An unrepentant Barnes was sentenced to 36-month prison sentence.

“Only God could judge,” said Wimberly. “He had a tough ending, but a good tenure.” Indeed, many have said Barnes managed to stabilize taxes and city’s finance during his tenure.

Wimberly said he was appointed by Barnes as the recreation coordinator for the city.

McKoy said the funding for the stained glass window will come from his foundation and the Torres family. He said no taxpayer money will be used for the window.

McKoy did not have a cost figure for the stained glass window. Torres did not respond to calls for comment after his announcement, but his office confirmed the funding for the window will come from the mayor and council president.

Torres said his family and the Barnes family were very close despite the election fight that ensued between the two men. Barnes, a Republican, ran for a second term while under indictment and was defeated by Torres, a Democrat.

“I’m at a loss for words,” said Aslon Goow, who served as councilman while Barnes was in office.  “As much as I like Marty Barnes, I think they’re sending a bad message.”

“He served his time. He paid his dues,” said Jimmy Richardson, historian.

McKoy said the city already honors many of its mayors with their portraits in city hall. He said Barnes’ portrait also hangs there. The councilman was part of Barnes slate which the mayor ran to consolidate political control. McKoy was the sole winner out of all the other candidates who were part of the former mayor’s slate.

Barnes represented various parts of the city before becoming mayor. He began his political career in the city by winning the 4th Ward council seat. He served 4th Ward residents from 1976 to 1980, according to city records.