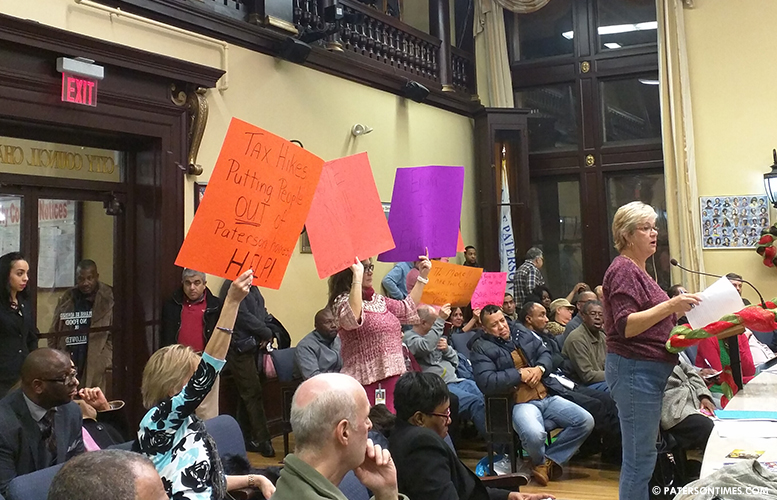 “We can’t afford to stay here, but nobody will buy our homes,” said Margaret Knudsen, a Garret Heights homeowner, whose taxes have skyrocketed over the past year.

Knudsen was hit with a retroactive tax increase after the city completed its revaluation in the past year, she said. Her property assessment did not significantly drop during the citywide revaluation grouping her among the one-third of homeowners whose taxes have gone up by thousands of dollars after the new assessment data was applied.

“Every year we have to deal with tax increases,” added Miguel Diaz, president of the Eastside Neighborhood Association. He said many homeowners in the Eastside section have abandoned their homes after last year’s tax increase that resulted from the retroactive application of the new assessment data and the doubling of the tax rate.

“We thought we’d be stable for a while,” said Diaz referring to the last year’s large increases.

The average homeowner with a property assessed at $192,600 will see as much as $1,000 reduction in taxes as a result of the revaluation, said city officials. However, this leaves out other homeowners whose property assessments did not significantly drop. Kenneth Morris, councilman at-large, chairman of the council’s finance committee, explained the re-distribution of the tax burden as a result of the revaluation has saddled a third of property owners with higher taxes.

“We just don’t have any more money. We’re finished,” said Knudsen. In fact, a study by New Jersey Future found city property owners have the second highest housing cost burden in the state.

Knudsen and some of her neighbors, who were under a tax abatement, are also covering services that the city is legally required to provide.

“You want to triple our taxes at the Garrett Heights. We pay for garbage pickup, we pay for recycling, we pay for snow removal, and we pay for street lights. All of these are services that should be provided by the city,” said Joseph Atallo, another Garret Heights homeowner.

The city has been in talks with the property owners to either provide municipal services to homeowners there or reimburse them.

Council president William McKoy blamed the state government for the tax increases. “The state has a real strangle hold on the city,” he said.

“City Officials have employed numerous tactics to lay blame for their budget at the feet of the State. However, it must be noted that the Division of Local Government Services has awarded Paterson $25 million in Transitional Aid; an amount greater than any other municipality,” said Tammori Petty, spokeswoman for the New Jersey Department of Community Affairs (DCA) on Wednesday afternoon.

Business administrator Nellie Pou said the state provided the same amount of aid as the previous year with the condition the city will raises the maximum amount through the municipal levy.

Some of the demonstrators urged the council to fire employees to cut spending in order to prevent a tax increase.

“It’s going to take extraordinary courage to vote no,” said Georgette Derouche, another Garret Heights homeowner, referring to the budget amendments resolution before the council.

Derouche was among a large crowd of homeowners who packed the city council chambers on Tuesday night.

Council members ended up rejecting the budget changes in a 4-3 vote. The changes called for a 6.1-percent increase to the municipal tax levy to $157.3 million from $148.2 million last year.