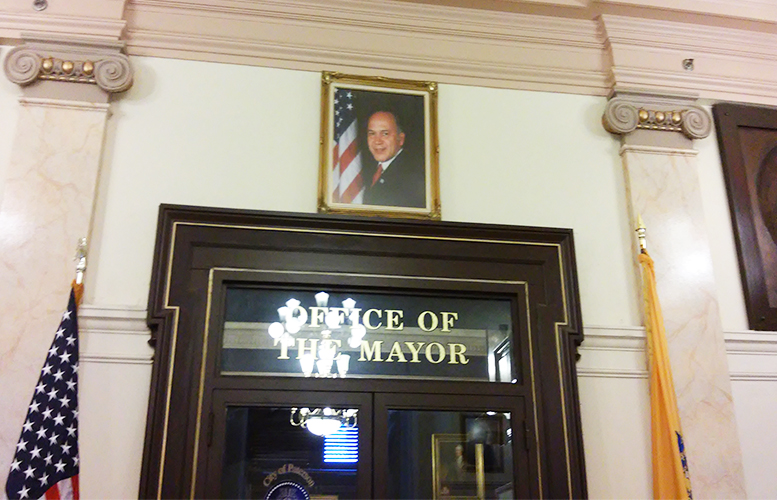 For the third time in four months, mayor Jose “Joey” Torres’ administration is warning of a government shutdown after the city council’s rejection of his budget amendments.

Torres said he is preparing for a municipal government shutdown next week by sending out letters to 1,800 city employees and vendors warning them of a shutdown, according to a Paterson Press report.

“I got no comments for you,” remarked Torres when contacted about the budget crises. The report says Torres is moving to notify 1,000 non-essential city employees to not report to work next Tuesday as the municipality will not be able to pay them.

“Shutting down government is not the answer,” said council president William McKoy. He said he has yet to speak to Torres about the potential shutdown, but the budget revisions will be before the council for a vote on Tuesday night.

Torres’ shutdown warning comes after the council in a 4-3 post-midnight vote rejected his budget amendments that included a 6.1-percent tax hike.

Council members Alex Mendez, Mohammed Akhtaruzzaman, Andre Sayegh, Julio Tavarez voted against the budget revisions citing the impact a six-percent tax hike will have on homeowners, dozens of whom demonstrated urging the council to reject the budget changes.

Ruby Cotton, Michael Jackson, and McKoy voted in favor of the budget. Some council members wanted to reduce the municipal tax levy, but business administrator Nellie Pou told them a reduction in the levy would result in equal reduction in the $25 million transitional aid award.

The state expects transitional aid recipients to set their levy at the maximum cap, said Tammori Petty, spokeswoman for the New Jersey Department of Community Affairs (DCA). She said this is done to ensure local taxpayers are not overly reliant on state aid and to demonstrate the city has done everything within its power to remedy its problems.

“Without the $25 million we’d be up the creek without a paddle,” said McKoy. The city received an aid amount greater than any other New Jersey municipality, according to the state.

“While the Council has had the introduced budget since last fall, the Division is unaware of any suggestions for prudent and effective cuts,” said Petty. “Rather, they have resorted to politics and gamesmanship that threaten the City’s overall financial health and adversely affect taxpayers and employees.”

Kenneth Morris, councilman at-large, who did not take part in the early Wednesday morning vote because of a work obligation, found fault with the characterization that the council is playing politics with the city’s finances.

“I find it curious when the legislative body takes on its fiduciary responsibility that’s gamesmanship, but when the administration doesn’t present a reasonable budget and then blackmails the council into voting for that budget by sending out letters to employees that they won’t get paid that’s not called gamesmanship. What is that called good government?” said Morris.

Morris said the council approved the introduced budget because the Torres administration promised to present a final budget with significant reductions. He indicated that has not happened.

“The mayor has to be more fiscally conscious,” said Andre Sayegh, 6th Ward councilman. He and others have said Torres has shown little seriousness in reducing expenditures. “He’s got to have more concern about our constituents.”

Petty said council members could be fined $25 per day if they fail to adopt a budget which would put them in violation of state law. Morris said the council can adopt a budget, but not the budget submitted by the Torres administration.

The Torres administration introduced a $283.22 million budget and sought $38.4 million in state aid. “This request was unreasonable and the State advised the City that it would not receive transitional aid funds in excess of the $25 million,” said Petty.

Morris also noted the early morning vote dealt with budget amendments and not the finalized budget. The administration wanted to increase the municipal tax levy to $157.3 million from $148.2 million last year.

Morris said the state provides the city with 10-percent of its budget. He suggested incrementally reducing the equivalent of that percentage out of the budget to wean the city off transitional aid.

The overall city budget for this fiscal year is $275.8 million up from last year’s $252.6 million. The larger overall budget includes more than $7 million in grant funds, according to officials.

Morris has been the peacemaker in many of the past budget battles between the council and the mayor often striking compromises that are acceptable to both sides. He would not say for sure whether he intends to modify Torres’ submitted amendments to make it acceptable for council members.

The rejection of Torres’ amendments came as no surprise. Twice the council voted down his temporary budgets in the past four months to communicate he needs to reduce spending.

Sayegh said he saw no indication the mayor intends to cut spending.

Sayegh said the budget would have to be significantly reduced for it to earn his vote. He said there may not be enough money left in the fiscal year 2016 budget to cut enough to get his support.

When asked if he would consider changing his vote, Akhtaruzzaman said, “People can’t afford the taxes. You saw the crowds.”

Mendez and Tavarez did not return calls for comment.