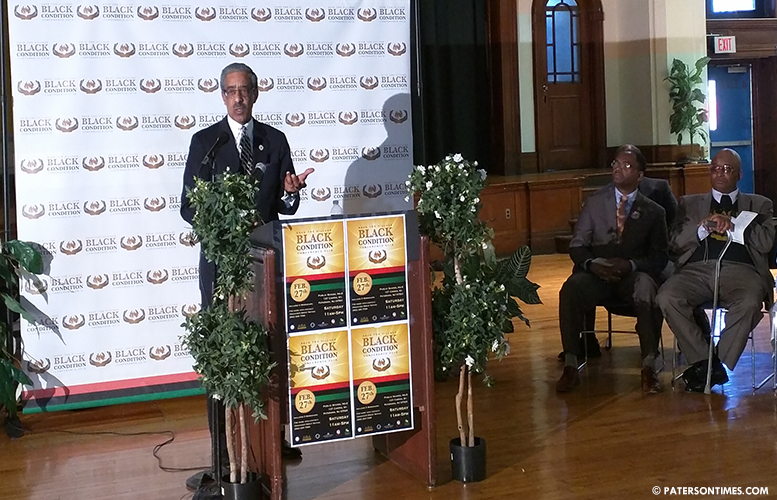 The city’s African-Americans held a convention made up of various workshops at School 6 on Saturday morning to tackle the many negative social and economic problems called the “black condition” that plagues their community in the Silk City.

“There’s something about coming from slavery,” said Ronald Rice, a New Jersey state senator, who delivered the keynote speech at the event. He said nearly 400 years of slavery has left its mark on the African-Americans saddling them with what he described as “slave mentality” which has held back many blacks from advancing socially and economically.

Rice said many immigrants who arrived through Ellis Island excelled while blacks have not had the same luck. He pointed to the proclivity among some African-Americans to not pursue work with the rationalization some jobs are beneath them.

“We act like we don’t want to work,” said Rice. One of the organizer of the convention community activist Ernest Rucker pointed out that sometimes businesses discriminate against African-Americans.

Rucker said he visited a grocery store that had a sign on the window seeking labor. When he spoke to the store owner for his nephew, the business owner told him he only hires family members.

Rucker owned that some businesses’ reluctance to hire blacks may have to do with perceived or real work ethics problems. “We need to teach our children work ethics,” said Rucker. You can’t report to work on your time, but when you are needed by the employer, he noted.

Brent Nation, another community activist, who organized the convention, said the city does not have a single black owned grocery story. He said he drove around the city and could not find a grocery store that was run by a black owner.

A claim that could not be verified on Saturday.

Nation said the convention included seven workshop. One dealt with entrepreneurship and encouraging African-Americans to start businesses in their depressed neighborhoods to create job opportunities while building economic self-sufficiency.

The unemployment rate nationally for blacks is twice that of whites, according to the U.S. Department of Labor’s Bureau of Labor Statistics. Widespread unemployment could be reduced by getting more African-Americans to enter commerce, he said.

“The black neighborhood is a colony,” added Bilal Hakeem, a city resident. He said many of these neighborhoods have to rely on the outside for basic necessities.

Nation said the convention called the “Save the Village, Black Condition Conference” is seeking to revive the defunct Black Chamber of Commerce to promote entrepreneurialism and encourage existing businesses to expand to create opportunities.  He said there has been an effort to get local businesses to file the proper registration documents and other paperwork for their businesses. Many have tough time obtaining Small Business Administration (SBA) loans to expand due to sketchy record keeping and paperwork, he said.

The youth workshop was led by Tiffany McKoy.

McKoy, who is the daughter of council president William McKoy, said she went through the city’s public school system to become an industrial engineer for the U.S. Department of Defense.

She served as a role model to youngsters who attended the conference. “It gives younger people a snapshot of what they can achieve,” she said. She said the city’s “lackluster” education system is not helping young people.

Many of those young people, unlike McKoy, come from unstable, single-parent, families. She said to overcome that disadvantage, young people have to be steered toward community resources.

Alonzo Moody, one of those community resources, has touched the lives of many young people. A community stalwart, Moody has been able to mentor young people who strayed, and successfully helped them become productive members of society.

Moody spoke at the seven-hour long event earlier in the morning. Other speakers included Lawrence Hamm, of the People’s Organization for Progress, and Hashim Garrett, who preaches non-violence.

In its second year, the conference seeks to build awareness about the many issues faced by the city’s African-American community with the hopes of producing some solutions through discussions.

Attendance to the event has been growing, said Nation. He reckoned 300 people came out for this year’s conference.

“Black people are still asleep,” said Ricky Collins, a resident. “This event helps to wake them up.”

Rice lamented the near disappearance of policy discussions in the black community, where leaders would gather in a church, talk about problems, come up with a solution, and attempt to implement it through political means.

“We stopped the policy meetings and moved to politics,” said Rice.

Brent and Rucker though seem to be reviving the policy meetings, at least in the city’s black community, through their annual conference.