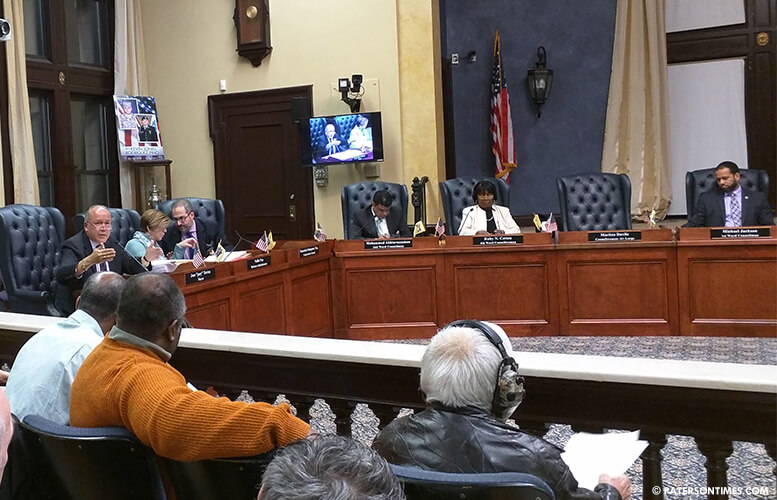 The battle over the city’s budget continued early Wednesday morning when the mayor and council members failed to strike a budget deal despite repeated attempts to reach a compromise.

The opening compromise attempt came with Kenneth Morris, councilman at-large, proposing to cut the municipal levy increase by $494,000 to soften the tax impact on homeowners. His proposed reduction took into account an equal amount of cut in state transitional aid which would have reduced municipal spending by $988,000.

Morris’ amendment to reduce appropriations to $275.76 million from $276.26 million failed to garner the five necessary votes.

Four council members – Morris, William McKoy, Ruby Cotton, and Michael Jackson – supported the change in the budget amendments which were up for a vote while three – Mohammed Akhtaruzzaman, Andre Sayegh, and Alex Mendez – did not see the cuts deep enough to support it.

Morris pointed out the city has spent 85-percent of its budget. “Once the toothpaste is out of the tube you can’t put it back,” he said.

The council could only cut from the $17.9 million that solidly remains unspent in the budget with less than four months to go in the fiscal year, said officials. Since the start of the fiscal year in July 2015, the council has approved $258.28 million in temporary spending.

“It’s going to be tough. We’re down to the bones as the amendments are,” said mayor Jose “Joey” Torres.

Torres offered to take out $250,000 from the budget that state awarded to the city to hire a financial expert to trim unnecessary expenditures and assist the city to get off state financial assistance over a five-year period.

A reconsideration of Morris’ compromise also failed with Morris, McKoy, Cotton, and Jackson in favor and Akhtaruzzaman, Sayegh, and Mendez against.

With not enough votes to amend the budget amendments, council members were forced to consider the original budget amendments proposed by the mayor. The un-amended budget amendments failed in a 4-3 vote: Morris, Akhtaruzzaman, Sayegh, and Mendez voted against while Cotton, Jackson, and McKoy voted in support.

Jackson criticized Akhtaruzzaman for voting no without proposing any possible solutions. He described the deadlock between the mayor and the council as “childish.”

The mayor warned the city could find itself in another shutdown — like the one-day shutdown that took place early last week — when the municipal government runs out of money sometime in April.

“It’s no threat. It’s the reality. You gave me temporary appropriation,” said Torres.

Torres said the state could fine council members $25 per day fine to get them to adopt a budget or it can appoint a fiscal monitor who would usurp the democratic authority of the mayor and council on fiscal matters.

The mayor said a fiscal monitor will have to be approved by the state’s local finance board.

“We’re in a fix,” said council president McKoy. “If we’re here, we should have been able to have a compromise.”

Indeed, the mayor was greatly criticized last week, when he did not attend an emergency meeting to lift the government shutdown, which impacted more than a thousand city workers. His presence was welcome by all at Tuesday’s meeting, albeit with fresh criticism over the potential tax increase.

Torres gave a presentation in which he has repeatedly said most homeowners will see a $2,000 reduction — for an average home valued at $190,600 — in their tax bills this year compared to the previous due to the drop in assessed property values.

“No way!” shouted a homeowner from the audience. “You’re a liar!”

The council chamber was packed as homeowners face the real possibility of being hit with two big tax increases from the municipality and the public schools.

Torres at times butted heads with Garret Heights homeowners, who have been hit hard by tax increases. He mentioned many homeowners at the development have not been paying their fair share of taxes because they were under a tax abatement.

The homeowners hit back by telling the mayor they moved into the development because of the tax incentive.

The homeowners held up signs — “Torres the Bully” and “Tax and Spend Torres” — severely criticizing the mayor.

Garret Heights property owners also urged the mayor and the council to get the city off of state financial assistance. City officials have been telling homeowners the state’s strict line that a a dollar reduction would result in a dollar reduction in state aid have prevented them from reducing the 6.1-percent tax increase.

“6%, %5, they reached their breaking point,” said Sayegh. He pointed out the shifting of tax burden towards commercial property owners and the doubling of the tax rate both of which have savaged those whose property assessments did not fall by 30-percent or more during last year’s property revaluation.

The mayor is hoping a full council will approve the budget amendments his administration has proposed. At-large councilwoman Maritza Davila may be able to cast the 5th vote at a future meeting to end the battle over the budget amendments which will pave the way for a new fight over the adoption of a final budget.