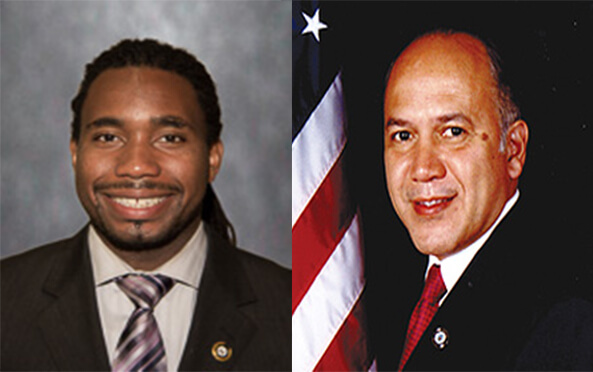 Mayor Jose “Joey” Torres and school board president Christopher Irving clashed over the mayor’s proposal to audit the district’s budget on Tuesday night as the state-operated school district is looking at increasing the school tax to raise $5 million to address a large budget shortfall.

“We do have the authority under the law,” said Torres.

The county superintendent of schools under certain circumstances has the authority to call for a forensic audit of a school district. In state-operated districts, the state’s commissioner of education may authorize an audit, according to state regulations.

State laws also require the local school boards to secure annual audits of district’s finances. There does not appear to be any specific laws that state the mayor or city council have authority to audit the district’s budget.

A jocular text message was circulating among school board members that the mayor is attempting to audit the state.

The council had before it a measure to solicit proposals to undertake a review of the district’s budget.

The mayor said he does not wish to be placed in a spot to make recommendations to cut specific services like programs or special education.

“Which is why mayor you should leave to the board that’s elected to do so,” said Irving.

“A board that was elected to do so that doesn’t have statuary powers to do it,” responded Torres referring to the advisory role of the city’s school board.

Irving said the city is attempting to “meddle” in the district’s business.

State-appointed district superintendent Donnie Evans is attempting to raise the school levy by 13.6-percent to bring in an additional $5 million revenue from homeowners.

The school board has opposed any new taxes on homeowners.

The superintendent initially proposed to increase the school levy by $27.2-percent to raise $10.6 million.

Evans then cut the higher percentage increase by half.

The mayor is seeking to raise the municipal levy by 6.1-percent to balance his budget which has resulted in a bitter struggle in the city resulting in a brief one-day shutdown of city government.

“We do know, we’re state controlled, and the state superintendent ultimately, has the authority to move the budget document forward,” said Torres. “I want to be prepared.”

Council president William McKoy said the city council and the school board will convene a joint meeting to discuss the school levy increase.