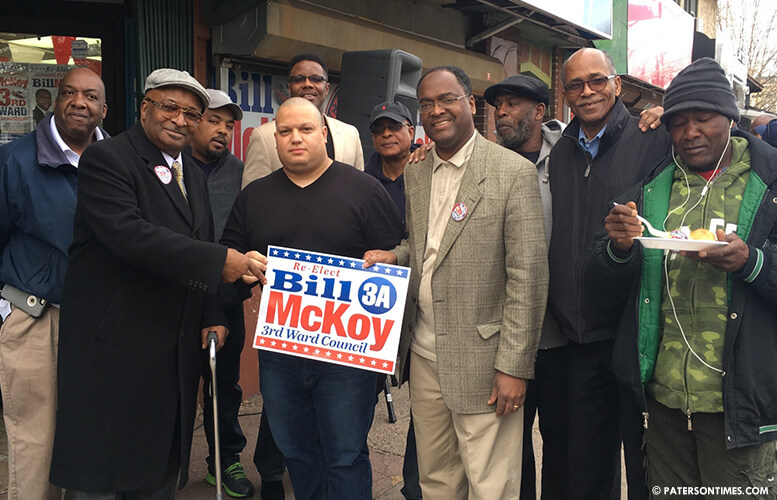 William McKoy, 3rd Ward councilman, who is running for re-election, thinks the entire stretch of Route 20 can be further developed to bring more commercial businesses to the city. He told a room full of supporters on Vreeland Avenue on Saturday afternoon that one of his goal in the next term will be to bring in ratable to the city by expanding the Route 20 commercial corridor.

McKoy said the way out of the city’s fiscal woes is by expanding the municipal tax base. He said the city is working on zoning that stretch commercial to ease the bureaucratic hurdles a company must go through to locate in the area.

Having been on the city council for 16 years, McKoy has witnessed the struggle the city went through to bring big-box retailers to the city. He has played a role in it, he said.

“He’s doing a great job,” said Verma Lewis, a 3rd Ward resident, who attended the councilman’s headquarter opening. She said McKoy’s steady leadership has held the mostly residential ward from deteriorating like other parts of the city.

“Who can do a better job than he?” asked Mark Munir, another 3rd Ward resident, who has been residing in the Eastside section for more than two decades. He is responsive when you call him, he said.

Munir said he preferred the incumbent over the change being promised by three of his opponents. “I’m not going to say change is not good, but why change something that’s good?” he said.

“No one has a plan. All they have is change,” said Ernest Rucker III, who is working on McKoy’s campaign.

Rucker lives in the 4th Ward.

Many residents from other parts of the city came out to support McKoy. He faces a tough re-election campaign, but is confident he can keep opponents at bay.

“He represents the whole city,” said Malikah Abdullah, former school board member, who also lives in the 4th Ward.

Abdullah said McKoy’s experience on the council is worth more than that of all his opponents combined.

“He has integrity,” said community activist Waheeda Muhammed. She said McKoy has always been able to stand up on the right side of things despite being friends with many on the council. For example, McKoy was the first to introduce a resolution to urge mayor Jose “Joey” Torres to repay the $74,000 in questionable pay that he took from the city prior to leaving office in 2010.

Torres was cleared by the Passaic County Prosecutor’s Office of any wrongdoing in connection to the severance pay.

McKoy was also first to call on the New Jersey Attorney General’s Office and the Passaic County Prosecutor’s Office to investigate allegations the mayor used public works employees at his home.

Muhammed said McKoy has been able to do all of this without souring his relationships with his colleagues or friends. No matter who it is, if you do something wrong, he will call it what it is, she said.

One of McKoy’s supporter Patrinella Samuels, who lives in the 3rd Ward, pointed to the freshly paved street outside his Vreeland Avenue headquarter. “Look at that road,” she said crediting the councilman for getting the road resurfaced.

Vreeland Avenue is a Passaic County road, said an offical. The county recently resurfaced the road.

“You don’t find many potholes in the Eastside section,” said Samuels.

“He’s got them to fix the roads,” added Lewis.

The 3rd Ward has received more roads than any of the six wards in the city under Torres’ $37 million road reconstruction project.

“Look at the ward. It looks great,” said David Barnett, who lives in the Eastside section. “Talking is one thing. Getting the job done is another.”

Barnett said McKoy has been able to get the job done.

Many of the 3rd Ward residents who came out for the councilman’s headquarter are longtime supporters. Many also own homes and have been hit hard by tax increases, particularly those who reside in the Eastside section.

McKoy has supported budgets that have had tax increases over the past years. He said it’s preferable to shutting down government services as was briefly done earlier in the month.

“He’s trying his best,” said Lewis when told of the councilman’s budget votes.

Barnett said the city needs to spend more money to provide better services to its residents. He said the city has little choice considering many surrounding communities send their troubled residents to the Silk City for various social services at Eva’s Village and Straight and Narrow.

“We’re seeing more police patrols. The streets are a lot cleaner,” added Joanne Bottler, 3rd Ward resident. “If it were up to me he’d be mayor.”