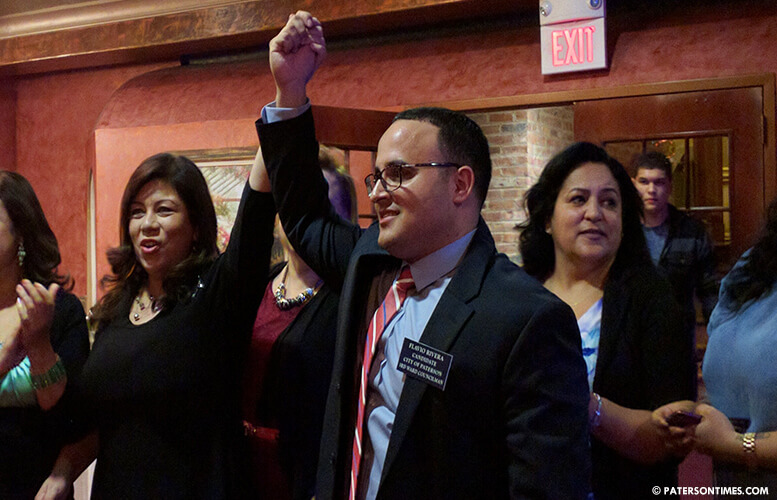 “We have tax increases every year,” said Rivera addressing about 110 people inside the Riverside Manor, where tickets went for $75 per person. He said while homeowners are paying more and more in taxes they are receiving less and less in services.

Rivera, who serves as the treasurer for Passaic County, attributed the annual increases to poor management of the budget. He said current council members have sat back while the administration repeatedly provided irresponsible budgets.

A certified municipal finance officer Rivera said he has reviewed the city’s budget. The administration builds an unrealistic budget with inflated numbers to present to the council rather than creating a responsible budget, he said.

Rivera said he thinks there are areas where the city can reduce spending to increase it elsewhere. He said the administration gets away with stuffing line items with funds only to transfer it to a different area at a later point.

“The people in office don’t know how to manage the budget,” added Ricky Luna, who lives in the 3rd Ward. “Taxes are too high. He’s going to lower them.”

Luna said he has confidence in Rivera’s abilities. Rivera, who has an accounting degree from Ramapo College, has worked in the city’s finance department for a time before moving to county government, he said.

Rivera said it would be difficult to lower the taxes, but said he plans to work on preventing future increases.

“McKoy is doing nothing in our ward,” said Ana De Jesus, who has been living in the 3rd Ward for the past 17 years, referring to incumbent councilman William McKoy. “I never see him.”

De Jesus said she contacted him during the last snowstorm when many streets were poorly cleaned or not cleaned at all only to receive no response.

“We have a councilman who hasn’t been visible in 16 years,” said Rivera attacking the incumbent.

Rivera also lamented the marijuana smoking that takes place in Eastside Park. “You go to that park and everyone’s smoking drugs,” he said. Rivera’s solution is to increase patrol of the park, but that will require more staff. He said he will shift money in the budget to allow the city to hire additional staff to better patrol the park.

There has been talks of getting the city’s special police officers to patrol Pennington Park and Eastside Park particularly during the summer months to ticket drug users and deter other criminal activities at the parks.

“My biggest concern is crime,” said Walterio Grant, who works as a transportation supervisor at the Valley Hospital. He said he came home one day from work to find a shooting had taken place on his block.

“It was a little rough, but it’s rougher now,” said Grant. Grant lives on the same block as Rivera. He said Rivera has a snow blower that he takes out after a winter storm passes and often assists in digging out his neighbors.

Grant said Rivera has helped him dig out after a snowstorm using the snow blower. He is hoping someone can make his street safer. There’s not much council members are able to do to target police to a specific block or neighborhood except designating it as a hotspot.

Council members have been using the hotspot business curfew ordinance to force liquor stores, chicken joints, and other late night businesses to close at midnight in high crime areas. The 15 designated hotspot areas witnessed 79-percent reduction in non-fatal shootings in the first full year the ordinance was in place, according to police.

Rivera expressed an ambivalent position on the business curfew ordinance. He did not think it prudent to shutdown New Jersey’s 3rd largest city at midnight. He noted he is willing to support expansion to some areas, but not others.

Grant said he has never contacted McKoy about the crime problem on 8th Avenue. He suggested the problem is getting progressively worse on his block.

“He’s been there too long. He’s taken this job for granted,” said Rivera referring to McKoy. McKoy has been representing the 3rd Ward since 2000.

“People are hungry for change in this city,” said Rivera.