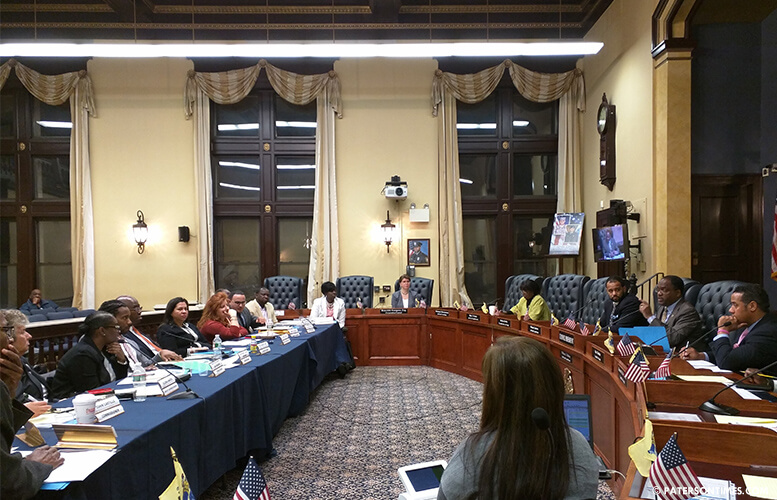 With one week to go before the state-operated school district submits its budget with a $5 million school levy increase to the New Jersey Department of Education, council members on Wednesday evening voiced their opinions against an additional tax increase on homeowners.

“It takes only a tea spoon of water to drown a guy,” said council president William McKoy, motioning homeowners are over up to their necks in tax increases, at the joint meeting of the municipal council and the board of education. He said the $5 million though a small increase after the district avoided significant increases to the school levy since 1991 is still great for homeowners in a city where median household income is $33,964 – less than half that of the state.

In fact, the city’s homeowners have the second highest housing cost burden in the Garden State, according to a recent study.

“Increasing taxes is not pleasant. It’s a bitter pill to swallow for everyone,” said state-appointed district superintendent Donnie Evans noting he too is a homeowner in the city. He said at the joint meeting he has communicated the district’s need for additional state funding to the state’s commissioner of education David Hespe.

“Tax increase of any type is just not possible at this time,” said school board president Christopher Irving. Under the School Funding Reform Act formula the city should contribute $85.1 million for 2017, according to the Education Law Center, a public schools advocacy. Homeowners have been contributing $39 million each year to the school district.

Kenneth Morris, councilman at-large, said it’s a “slippery slope” when the district develops a taste for increasing the school levy it will be more inclined to repeatedly do the same for the foreseeable future.

Evans did not rule out a school levy increase after the meeting; however, he said the district is searching for further cuts. “I’m still looking,” he said.

Over the past eight years the district has been underfunded by $278 million, according to the center. The underfunding has resulted in the layoff of 335 employees last year. This year, the superintendent has proposed closing schools and cutting 115 positions.

This year’s cuts also includes the controversial merger of athletics programs. Michael Jackson, 2nd Ward councilman, shared his story of receiving a golden ticket to attend college. He said he attended university on a football scholarship without which he would likely have not had a chance to attend college.

“Had I not received a full scholarship, I wouldn’t have had the opportunity to attend college,” said Jackson.

Jackson said reducing athletics programs harm students in the short and the long run. He suggested with athletics cuts, many will not be able to obtain athletics scholarships, which has helped a large number of city students to attend college.

“This budget cannot provide a thorough and efficient education for our children,” said Rosie Grant, executive director of the Paterson Education Fund, an advocacy.

Both the council and the school board agreed to craft a joint resolution to communicate to the state the district is not being funded as mandated by the New Jersey Supreme Court. Many pointed out the state’s constitution guarantees a “thorough and efficient” education to all children which the state government is violating with impunity.