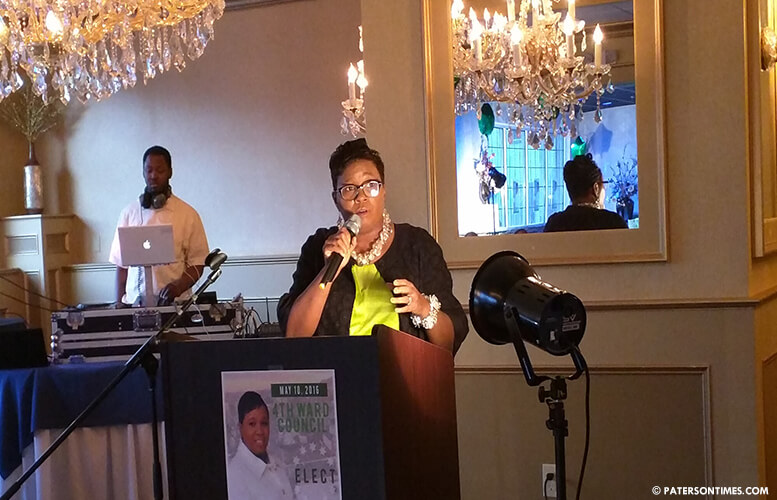 “I’ve seen the 4th at its best. Then I’ve seen it go to a place that sometimes I’m embarrassed to say I’m part of it,” said Fischer.

Fischer highlighted a 90-day plan to put together a community calendar and an informational website to efficiently communicate with residents. She also plans to work within those three months to formulate a long-term plan to address the 4th Ward’s crime problem.

Fischer said the 4th Ward’s chronic crime problem will have to be addressed through education, re-entry, and demonstration. She said demonstration means cooperation with police and setting high expectations in the community that crime and other quality of life issues will not be tolerated by those living in the 4th Ward.

“When I walk through the 4th Ward it is like the Valley of the Dry Bones,” said Fischer drawing upon a biblical allusion. “We’ve lost our sense of community.”

Fischer, 48, hearkened back to her childhood, when there were strong figures in the African-American community, who managed to keep their community together. She cited a motherly woman who would keep an eye on her neighbors on Hamilton Avenue thwarting would-be burglars.

A substitute secretary, at the city’s public school district, Fischer shared a personal struggle, which she overcame through community support. She became pregnant with her first son at age 13.

An elderly woman in the community had the sense to urge her mother to take the young Fischer to the doctor. Her family and other community members came together to assist the teen to raise her child so that Fischer could attend Eastside High School.

That sense of community no longer exists in the 4th Ward, said Fischer. She said her task, if elected for a four-year term is to rebuild that community.

Fischer, who has organized massive demonstrations at city hall in the past, recognized the thin crowd that come out to the rally. She shared a story from mayor Jeffery Jones’ 2010 mayoral run to state small or large crowds do not define the outcome of an election.

“I remember the night, when we went to wish him well as mayor, the room was so packed, that we couldn’t find room,” said Fischer. “Numbers really never move me. We want to win this election by knocking on doors.”

Much was going on that Thursday. In fact, so much was taking place, that the city council was not able to gather quorum to hold hearings to address the controversy at the Board of Adjustment that has retarded development in the Silk City over the past more than half-year.

Fischer’s close supporters though made time to come out for the rally. “She’d make a good councilwoman,” said Wanda Phillips, 4th Ward resident.

Phillips said her biggest concerns were the dirty streets, speeding on Rosa Parks Boulevard, and loitering outside the Danforth Memorial Library. She has confidence in Fischer to address those issues once elected, said Phillips.

Rashawn Taylor, who lost his 20-year-old nephew Ramere Lockhart, said he is hoping she will be able to increase recreation to give hope to young people, too many of whom are dying on the streets.

“She’ll be able to bring the kids together,” said Taylor. He agreed with rebuilding the African-American community in the 4th Ward. “Family is important,” he said.

Fischer pointed to a table that was occupied by her grandchildren. She counted them and remarked, “I don’t want to bury none of them.”

“Today is no better than 4 years ago,” said Mark Fischer, her husband, who unsuccessfully ran for the 4th Ward council seat four years ago. “It’s worse.”

Speaking about policies, Fischer, the candidate, said she supports the business curfew ordinance, and would support its expansion. She said she will also oppose the large tax increases being passed on to homeowners.

Cotton, incumbent, has voted to raise taxes three times in the past four years of her term. She voted against the budget in fiscal year 2014, according to city records.

“I don’t have anything negative to say about Ruby Cotton,” said Fischer. She said Cotton is a good person, but has not been able to deliver for the 4th Ward.

Cotton faces Fischer and Juan Kivelier Sosa in the May municipal elections. Fischer said elected officials do right by voters when held accountable by them.

“When I get there hold me accountable. The city is in the condition it is because nobody held anybody accountable,” said Fischer. “We’ve got to make this community better.”