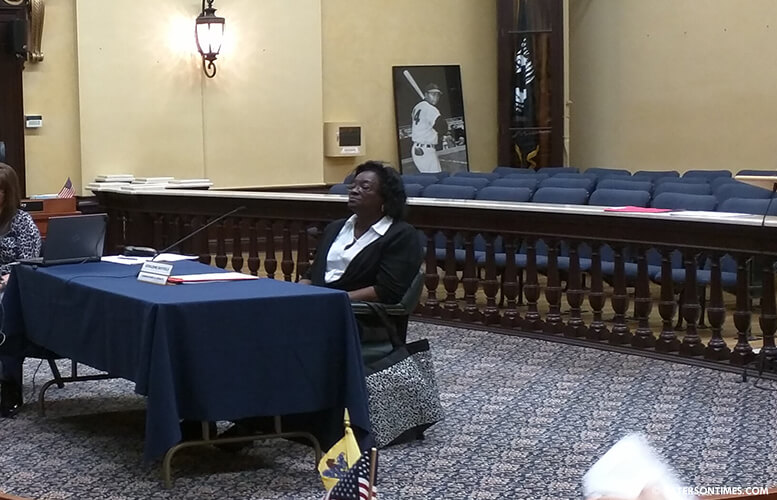 Under questioning from council members on Thursday night, board of adjustment commissioner Geraldine Rayfield had difficulty explaining the conflict of interest accusation she made against commissioner Montaha Deeb at the board’s reorganization meeting.

Rayfield stated in the July 9th, 2015 meeting that Deeb suffered a conflict of interest because she invited an applicant, Abdul Hamdan, to a Christmas party. She cited this as an ethics issue to force Aheya Khan, another commissioner, to withdraw his chairwoman nomination of Deeb.

“How does that translate to a conflict of interest?” asked council president William McKoy. He attempted to reason with Rayfield to tell her that inviting someone to a Christmas party does not translate into a conflict.

“Yes, it’s a conflict,” said Rayfield. She used “hearsay,” something she has heard others say, to assert that there was more to that guest invite to the mayor’s Christmas party.

McKoy asked the board’s attorney Marco Laracca whether that would constitute a conflict of interest.

Laracca suggested it would not. For instance, he said in a small town in which most people know each other, a person may come before the board with an application.

Laracca noted the obvious conflict of interest situations like having a financial interest in a project, voting on a relative’s application, or being a partner in a project.

“That man was her guest,” responded Rayfield.

Rayfield read out an ethics sentence that states no board member is allowed vote on an application in which they have personal and or financial interest. Michael Jackson, 1st Ward councilman, thought she was “misjudging” the situation based on an erroneous interpretation of the ethics code.

Jackson said it’s not Rayfield’s job to interpret law that’s why every board meeting includes an attorney.

The alleged conflict of interest that Rayfield mentioned has been one of several issues that has resulted in three Muslim members – Deeb, Khan, and Alaur Khondokar — of the board to boycott meetings for the past months.

Khan alleged at a public meeting that the three board members are often harassed to recuse themselves of unfounded conflict of interest when applicants with Islamic names appeared before the board.

Rayfield said she has been the subject of jeers and ridicule after the allegations appeared in newspapers stories.

“I’ve never been prejudiced towards anyone,” said Rayfield. “There was some things said about me that were appalling.”

Rayfield said the allegations were nothing more than a “blatant lie.”

Alex Mendez, councilman at-large, asked Rayfield if she and other members can return to the board and work together.

Rayfield said she is able to work with anyone.

Mendez wondered whether Rayfield and others can even work together without going back and forth with each other.

Rayfield said there’s no back and forth that happens between the members.

“The day of the reorganization there was back and forth,” said Mendez, who attended the July meeting.

Mendez said many questions board members ask applicants deal with operation as opposed to land use. Rayfield mentioned a time when Mendez attended a meeting with an applicant, who was seeking to open a business in the city.

Mendez did not believe the board should ask operations questions.

“You’re wrong,” said Rayfield. She said she can ask questions about operations when a business’ operations may impact health of neighborhood residents.

“You’re being combative,” added McKoy as Rayfield spoke over Mendez to make her points.

Rayfield said Mendez was allegedly trying to get his friend an approval from the board for a chicken slaughter house.

“You waited four years to bring this up,” said Rayfield to Mendez.

Mendez retreated without engaging in a verbal scuffle with Rayfield.

“This seems like there’s no cure,” remarked Mohammed Akhtaruzzaman. He wanted to know what transpired at the reorganization meeting that compelled Rayfield to tell Khan to withdraw his nomination of Deeb.

Rather than recounting the meeting, Rayfield told Akhtaruzzaman to read the transcript.

“You’re jumping on the bandwagon,” she told Akhtaruzzaman suggesting he is taking sides. Akhtaruzzaman appointed Khan to the board while Ruby Cotton, 4th Ward councilwoman, appointed Rayfield.

Cotton spent much time defending Rayfield. However, Rayfield’s bellicose attitude towards McKoy, Akhtaruzzaman, Mendez, and Jackson did not win her much sympathy.

Rayfield blamed the council for failing to address the issue when it first emerged. “We were ignored,” she said.

“Being a new member, I didn’t know what my role was,” said Cotton explaining why she did not urge action early on.