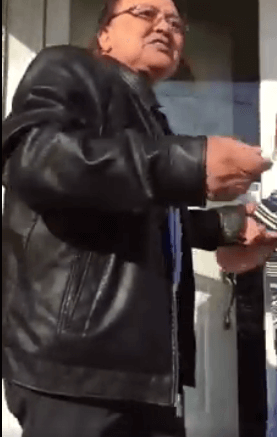 Goow said the situation unfolded at about 5:30 p.m. in the corner of Lenox and Chatham Avenues. He said a voter, who is recovering from an illness, went to his campaign office and requested a lawn sign.

A team from the Goow campaign visited the woman’s home to install the requested sign at which point the mayor’s brother appeared on the scene, said the former councilman. Gerardo Torres said he showed up because the woman, Maria Burga, called him to say she did not want the lawn sign.

However, when Torres knocks on the door, a surprised woman answers. Torres, who lives across the street from the woman, is seen in video footage, addressing the woman in Spanish.

“Tell him you don’t want the sign,” said Torres in an aggressive tone to the woman, according to three different individuals who translated for the Paterson Times.

Burga, who is evidently scared at the scene unfolding in her front yard, is heard saying, “No,” in the video.

“You’re intimidating her,” Goow is heard saying in the video.

Torres is seen rushing into the home as Goow tells him he cannot forcefully enter someone’s home without permission. Torres on Monday afternoon said has known the family for decades. He said his father sold the home to the Burgas.

Torres said he doesn’t have any political interest in the 2nd Ward race. He said his brother, the mayor, isn’t running in any elections for him to have political motives.

Torres in the video repeatedly asserts the home is his father’s house. He initially approaches the woman’s home and threatens Goow campaign workers he will call the police if they install the sign.

“It’s not your property,” Goow states in the video.

“It is. She’s my neighbor,” retorts Torres. “This is like my house. This was my father’s house.”

Goow ended up not installing the sign at the woman’s home. He said he did not want to risk the woman’s safety by putting up a mere lawn sign.

“She wants the sign, but she’s afraid,” said Goow.

Indeed, when reached by a reporter on Monday morning, Burga said she is fearful. She said she did not want to be involved in the situation.

Mayor Torres and former three-term councilman Goow have been bitter enemies for years.

“Shame on you,” Goow is heard saying in the video to the mayor’s brother.

“No, shame on me. She called me,” responds Torres in the video.

“Shame on you, Jerry,” says Goow in the video.