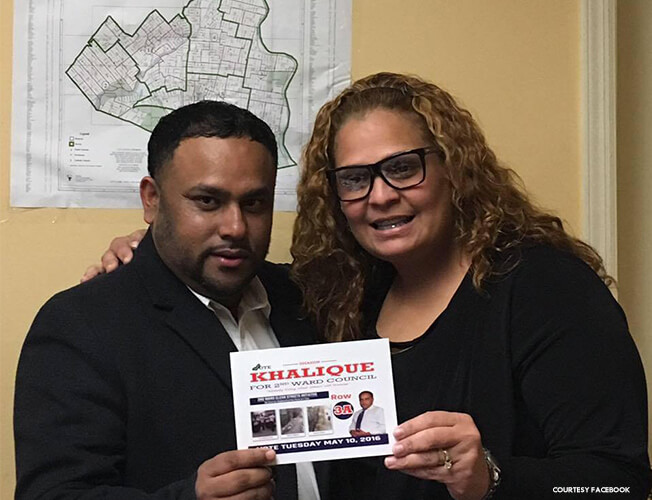 After making a social media posting alerting voters to be aware of a woman allegedly involved in the 2nd Ward mail-in ballot controversy, two men found themselves at the receiving end of a “cease and desist” letter and harassment charges.

The Facebook post made by Zahid and later shared by Faisal appears to show Morfa garbed in a hijab. “Everyone needs [sic] to watch out for this woman,” reads the post which goes on to allege Morfa “goes around disguising herself as a Muslim to gain votes in the Muslim community.”

The posting then indirectly states a certain group of individuals “go around stealing voters [sic] vote by mail.”

Kahf’s letter dated April 25th, 2016 accuses the two men of defaming Morfa’s character by stating she is “responsible for the Vote-By-Mail fraud in the 2nd Ward as well as stealing ballots from the resident’s [sic] mail boxes, among other things.”

The initial posting does not directly accuse Morfa of stealing mail-in ballots. In fact, the posting refers to a “they” suggesting the accusations are made against the Khalique campaign which has utilized mail-in ballots to obtain an edge in the four-person race.

However, a second posting by Zahid states, “This lady was caught stealing ballot from mailbox now she change her appearance fooling people wearing hijab, please everyone report her to the authority or police if u [sic] see her stealing ballots.”

Kahf did not return a call for comment for this report on Monday afternoon.

The two men were caught by surprise when they received the “cease and desist” notice from Morfa’s attorney.

“What did I do wrong?” wondered Faisal. He said Morfa also filed harassment charges against him.

Faisal said he was baffled at the harassment charge filed by Morfa at the Paterson Municipal Court. He said he never approached her physically or ever interacted with her.

“I don’t know her,” said Faisal. He said he only met Morfa briefly when she was campaigning for Khalique while he was showing a house on Hoxey Street.

“It’s intimidation,” said Zahid. He is also being accused of harassment by Morfa, he said. “I never met her. I don’t know her,” he said.

Zahid said he never interacted with Morfa outside of Facebook.

Both Zahid and Faisal are outspoken supporters of the incumbent while Morfa works for Khalique. Both men said after receiving the letter they pulled back on posting political messages on Facebook.

Faisal indicated the letter was little more than an intimidation technique to muzzle their speech on the social media website. When asked if the letter successfully stifled his political speech, Faisal responded in the affirmative.

“I stopped,” said Faisal of making political speeches on Facebook.

The letter ends by stating if the two men do not cease Morfa will file a defamation lawsuit.