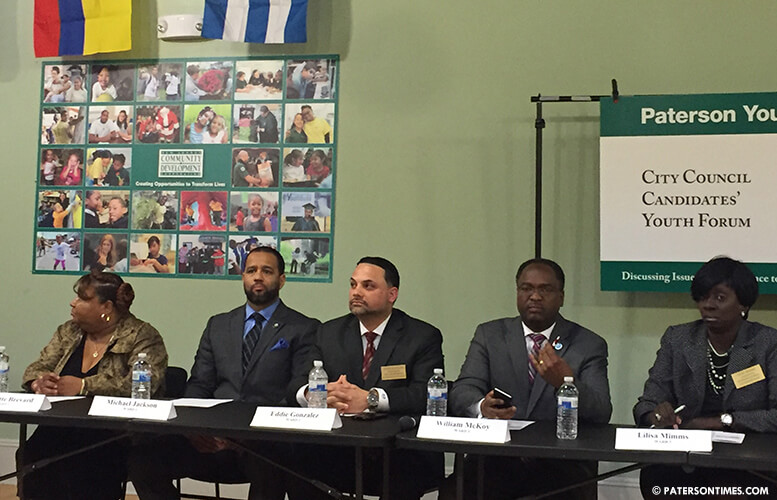 The forum began with a question about youth curfew. Antoinette Brevard and incumbent Michael Jackson, both 1st Ward candidates, said they were not in favor of imposing a curfew on young people.

“Young people need to get around,” said Brevard. She said some young people, who have family responsibilities, have to be outside of the house after dark.

“Some of our children work. They come home after certain hours,” added school board member Lilisa Mimms, 3rd Ward candidate.

“It’s really difficult to enforce,” said Eddie Gonzalez, 2nd Ward candidate. He said enforcing something like a youth curfew would take up police time when there are more serious issues authorities have to tackle.

“Where do you put these young people once you bring them to headquarter?” added incumbent William McKoy, 3rd Ward council candidate. “One of the dangers we have is our young people being criminalized very early. That means eliminating the opportunity to work in schools, work for the police department, the fire department, or many jobs.”

“I’m absolutely not in favor of a youth curfew,” said Jackson.

Jackson and others were then asked what steps they will take to increase recreation opportunities for young people.

Jackson said he has supported recreation by sponsoring the Nifty Lions, Positive Impact, and Diamond Divas.

“I’d like to see the schools be open for after school recreation,” added Brevard. She said schools could offer painting, drawing, poetry, and other activities at minimal cost to their neighborhoods.

Brevard also suggested encouraging parents to supervise recreation activities in neighborhoods.  “We used to have a lot of fun just playing with our neighbors,” she said recalling playing jump rope.

Brevard also supported building a youth center. She said a center would bring children out of their respective ethnic enclaves and help to bridge the ethnic divide in the city.

“A youth center would bring us close together,” said Brevard.

The three young men from the Paterson Youth Council asked the council hopefuls their views on giving priority scheduling at Pennington Park to a Bergen County youth soccer club for 30 years in return for $2 million in renovation.

“It’s an absolute joke,” said Jackson. He said it would be like having someone provide new sheets for one’s bed and demand priority sleep time from 12 a.m. to 8 a.m.

“You’ll ask, when do I get to sleep?” said Jackson.

“The plan is not worth the paper it’s printed on,” said Gonzalez.

The panel of young people then moved to taxes and education. The three boys asked whether the candidates would support raising taxes or cutting education which would lay off as many as 50 teachers.

Some docked the questions.

McKoy described the choice as a “false” dichotomy. He said the state’s constitution requires students receive a “thorough and efficient education,” an obligation the state has so far failed to meet.

Flavio Rivera, 3rd Ward candidate, said he provided solutions to balance the budget, by way of cutting expenditures to make do with what resources the district has in its hands.

Rivera and Simmons came late to the forum because both school board member had a board of education meeting.

The candidates said the city is not being provided the needed funding to provide students with their constitutionally guaranteed education.

“I just supported a bus ride to Trenton. I was on that bus,” said Jackson of his role in getting Patersonians to Trenton to demand more funding for the school system. He and others said the council needs to work with the school board to obtain more funds from the state.

The candidates were asked about lead in drinking water and what can be done to address the issue.

“I believe that’s a crime,” said McKoy describing the lack of notification to parents about lead in school water fountains.

“The parents should have been notified,” said Simmons.

Schools superintendent Donnie Evans has since apologized about the lack of notification to parents.

Rivera said the city should test all its parks, government buildings, and other organization. He said after testing all water sources, the fountains should be labeled, so as to inform children whether it is safe or otherwise.

“A good solution would be to provide or offer free or low cost water filtration for homes,” said Brevard.

Jackson noted that indifference to lead in drinking water may not be responsible.

The young people at the forum which was hosted at the Rogers Locomotive Building then asked about steps the city can take to reduce violence in the streets.

Mimms suggested spotlighting high crime areas to deter criminal activity. McKoy said drugs are the cause of violence in the city. He said the flow of guns from southern states have to be stopped by some sort of a task force that involves state level law enforcement agencies.

“Citizens have to become more involved in helping police do their job,” said Simmons. He said citizens in crime-ridden neighborhoods have to ditch the code of silence.

Rivera said police presence is lacking in the city.