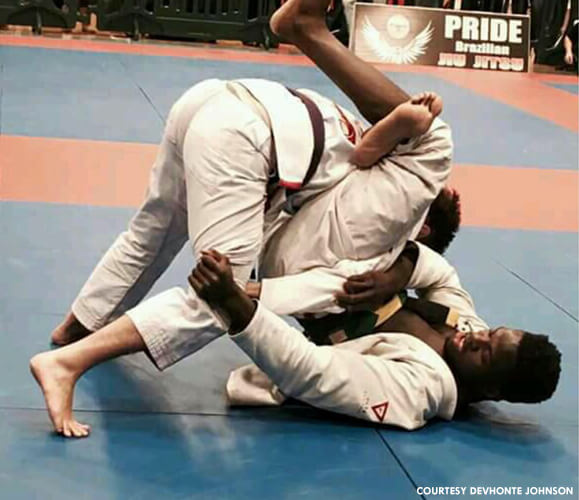 Devhonte “Bones” Johnson is flying to Abu Dhabi today on an all-expense paid trip to take part in the Jiu-jitsu World Pro trials.

“I’m very excited. It’s going to be my first time leaving the country,” said Johnson, 22, whose flight, hotel, and transportation expenses are covered by the UAE Jiu-Jitsu Federation. He said he won the ticket to the Abu Dhabi World Pro Jiu-Jitsu competition after a successful fight in New York City.

“It’s truly great. It’s not coming out of my pocket,” said Johnson. The federation doesn’t just hand out the tickets to anyone. The airfare, hotel, and meals are covered for high caliber athletes who have successfully won a trial in their home country.

The competition runs from April 19th to 24th, 2016 and features fighters from all across the world.

“I’m going to fight over there,” said Johnson. “It’s going to be a good opportunity to go out there and test yourself against the best in the world.”

He said the competition will feature a lot of cash prizes he is eying. When he is not fighting in the desert emirate, he will be sightseeing. Johnson, an instructor at the Unity School of Jiu Jitsu in Totowa, said one of the sheikhs of United Arab Emirates (UAE) will give him a tour of the city.

Johnson isn’t going alone. He said three team mates plus his instructors will depart from New Jersey to UAE. He said all three of his team mates are New Jersey residents. He has a solid record of victories with having taken part in seven fights in past competitions. He won 3 by submissions and 4 by decisions, he said.

Johnson, who lives on Godwin Avenue, picked up jiu-jitsu 4 years ago. When he is not practicing or fighting he attends Ramapo College to obtain a four-year degree. He said prior to college he attended Harp Academy. He played baseball and basketball for Eastside High School.

“Wow! That’s wonderful,” said Ruby Cotton, 4th Ward councilwoman, who represents the area where Johnson lives. She said she is unfamiliar with Johnson, but was happy to hear a city resident from her ward taking part in an international competition.