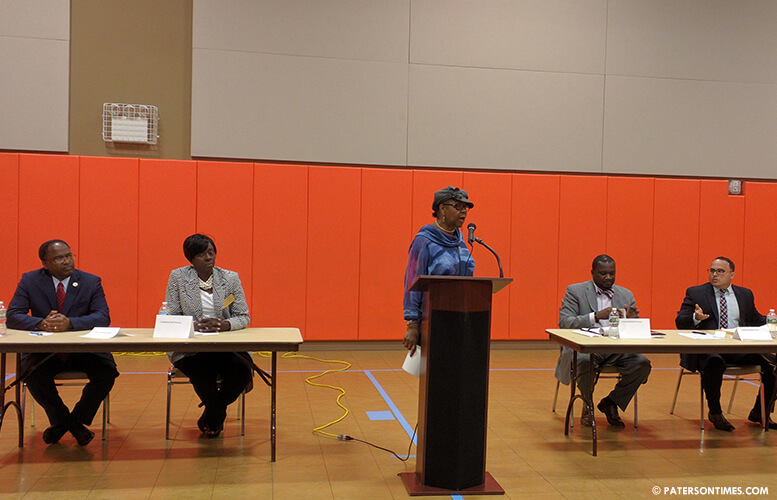 “Paterson needs an independent voice. You can’t have somebody working for the county and operate the city,” said McKoy at the Alexander Hamilton Housing Development’s Community Center on East 34th Street. He struck at the primary qualification Rivera has been using to make his case to voters.

Treasurer for Passaic County, Rivera argued Wednesday night he has the financial experience to oversee the city’s budget and hold the administration accountable. He said he would improve accountability at city hall by slashing overstated line items in the budget early in the year. He pointed to the tradition at city hall to introduce overinflated budgets only to reduce it later.

All four candidates running in the 3rd Ward said the solution to the city’s perennial budget problem is economic development.

“We got to make the city more attractive to business. We have to make sure we have safer, cleaner streets, and change the appearance of the city,” said Rivera. “Economic development will come.”

McKoy said the city is fixing the broken permitting division.

McKoy talked about economic development when he was asked what the city can do to get out of transitional aid irking Haytham Younes. Younes, a once friend of the incumbent and now a foe, shouted from the audience the councilman ought to answer the question at hand.

McKoy’s position has been that the only way the city can reduce its dependence on state aid is by growing its economy through development projects that bring large amounts in tax revenue into the municipal treasury.

McKoy and Rivera spurred during their turns at the microphone at the forum attended by more than 100 people which was not a debate. All four candidates picked questions from a basket submitted by residents in attendance.

Lilisa Mimms picked out a question which asked whether she would have voted to increase taxes. “Absolutely not,” she answered. “I will not vote on tax increases.”

Kenneth Simmons selected a question that asked about the city’s structural deficit. It asked what a candidate will do to address the deficit. Simmons said the way out is through economic development. He said he would like to see the city establish a community development corporation (CDC) which will be tasked to find ways to bring jobs and economic development to the city.

“The fiscal year starts in July, but we don’t get to the budget until sometime in March. That process should start in April before the fiscal year,” said Simmons. He said this will help the city cut spending in various areas when the money is still yet unspent to reduce deficit.

The candidates answered two-dozen questions including four from the neighborhood group. The group’s members asked what the candidates will do to reverse the spread of crime from designated hotspot location.

McKoy said the police director and chief are working on a plan to tackle drug dealing facilitated by mobile phones. He said more drug deals are happening in stable neighborhoods as dealers and buyers are transacting deals over phone as opposed to street corners in bad neighborhoods.

Police officers surveyed have indicated crime is spreading from hotspot areas to more stable neighborhoods; however, police brass have denied crime is being displaced citing citywide decline in violent crime.

Rivera was asked what the city can do to better Eastside Park. He said the park needs more police presence to deter law breakers.

Many of the voters at the conclusion of the forum remained undecided. “I’m not sure,” responded Eugenia Burton, when asked who she intends to vote for on May 10th.

Burton said city workers are failing to do their job in cleaning streets leaving many thoroughfares littered with trash.

Eugene Nelson said he has to do more research before he can settle on a candidate.

“I think he made the strongest case,” said Shirley Lusk, speaking about McKoy. “I like what he’s saying. My heart is with McKoy.”

Sabrina Tisdol said she made up her mind. She will vote for Mimms, she said. “I know she’ll go hard for the kids,” she said hoping to see more recreation for young people.

Tisdol as she spoke was approached by Simmons.

“Vote for the person who can do the job,” said Simmons. He said he played a role in obtaining local control in some areas for the school board. He also cited better graduation rate and attendance at the district during his six years on the board.

Tisdol though appeared unconvinced. When asked if her mind was changed she replied in the negative.