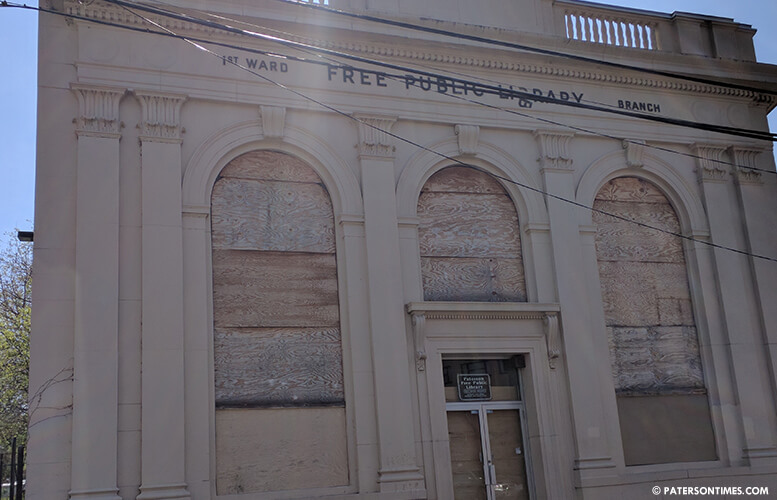 In an elaborate presentation that earned praise from his colleagues, councilman Michael Jackson proposed to re-use the abandoned 1st Ward library as a resource and technology center.

Jackson said a consortium made up of strategic partners like the Habitat Housing Association, the 1st Ward Community Development Corporation, and a number of area churches will work to revive the flood damaged library.

The consortium also has an advisory board made up of area school principals, city officials, community leaders, and others. The advisory board includes Mo Butler, chief-of-staff for senator Corey Booker; Bob Guarasci, executive director of the New Jersey Community Development Corporation (NJCDC); Atalia Young of the City National Bank, and many others.

If the plan is not fully in place after the 5th year, Jackson said the city will be able to re-take possession of 56 North Main Street. “We will do all of the repairs for the facility and bring it up to code,” he said on Tuesday night.

The roof of the building has to be replaced, said Jackson.

“This is one of those ideas that are great,” said Julio Tavarez, 5th Ward councilman.  “I like the idea from the get-go. It’s one of those great ideas that should not wait.” Jackson said the consortium has yet to be formally established.

Tavarez urged Jackson to rapidly move on the idea without delay.

“We do need something in that area,” said council president William McKoy. He thought it a good idea to introduce children to technology early in life.

Jackson said there’s a preliminary agreement with Microsoft to outfit the building with technology.

“We don’t need another library. Our kids go to the Broadway library,” said Kiya Randolph, who was a block away from the library that was damaged by Hurricane Irene five years ago. “They need to do something else.”

“There’s really nothing for kids here,” said Juanita Frame. She said she’d like to see the library re-open, but thought a technology center, which will provide students with interactive learning games, according to Jackson, a better proposition. “Fix it up and have something for the kids.”

It was not hard to see the issues plaguing the city’s 1st Ward. While the two women spoke, a group of young working age men were smoking marijuana, at 12 p.m. on Thursday.

The library shuttered in August 2011. The library system received $250,000 in insurance money for the building, but that was not enough to re-open the Northside branch. So the library rented a 400 square feet space at the Christopher Hope Center on Temple Street for a miniature branch which has been serving that neighborhood.

Library director Cindy Czesak did not return a call for comment on Thursday.

Jackson said mayor Jose “Joey” Torres suggested moving the building out of the flood area so as to prevent it from flooding a second time.

“I’m looking to bring life back into the 1st Ward,” said Jackson. “We want to make sure we provide resources to that area.”