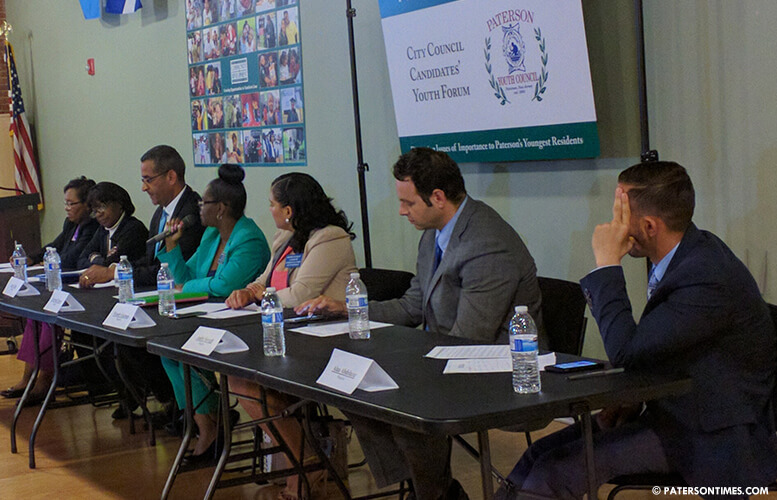 Candidates running in the city’s 4th, 5th, and 6th Wards discussed issues impacting young people in the Silk City such as recreation, street violence, and youth curfew at the Paterson Youth Council forum on Thursday evening.

The three-person teenage panel asked the seven candidate the steps they will take to increase recreation opportunities. Incumbent Ruby Cotton and challenger Della Fischer in the 4th Ward said the city’s churches and schools should be open for recreation after school.

“Open every place a kid can use as a safe haven,” said Luis Velez, 5th Ward candidate.

Wendy Guzman, another 5th Ward candidate, said schools can host movie nights and other activities like painting. “Why can’t we open up schools to our children? Our children don’t have anywhere to go after 3 p.m.,” she said.

“They don’t want to be out on the street,” said Al Abdelaziz, 6th Ward candidate, of young people. He said a basketball league was established with assistance from South Paterson businesses that meets every Tuesday night 7 p.m. to 10 p.m. to provide a place for young people who would otherwise loiter about the streets.

“After they are done playing basketball they are too tired to hang around the streets,” said Abdelaziz.

Abdelaziz said the Islamic Center of Passaic County is in the process of building a youth center in the 6th Ward. “That youth center is going to come soon,” he said.

Fischer said a future recreation center should be centrally located so that children from all six wards will be able to utilize it.

The city at present does not have a single recreation center.

“We need to do an aggressive fundraiser for the city,” said Chrystal Cleaves, 5th Ward candidate. She said the city needs to go after grant money as well as reach out to native professional athletes.

Cleaves suggested the city seek $2 million from the Bergen County soccer club that is looking to takeover fields at Pennington Park so the cty may build a recreation center. She does not support the agreement which would grant Cedar Stars Academy priority scheduling rights at the park.

The academy wants to spend $2 million to renovate fields at the park for a 30-year agreement.

Fischer called the deal “armed robbery.” She and others said they will oppose the agreement. Sayegh’s position on the deal appeared ambiguous.

“I’m a strong supporter of soccer,” said Sayegh. “We want to make sure we provide opportunities for our youth to use this field.” The agreement would open opportunities for 300 city children who would be enrolled into the academy’s program at no cost.

Sayegh and Cotton pointed out the agreement was tabled after questions were raised about the deal.

Velez at one point appeared to slam his opponents — Cleaves and Guzman — for opposing the agreement now, but doing little to impede it at the council.

“When you’re against something you’re there,” said Velez. Neither Guzman nor Cleaves attended council meetings to publicly oppose the Pennington Park deal.

Though the young people spent much time on recreation, they also asked about youth curfew and violence.

Majority of the candidates opposed imposing curfew for young people. Fischer said she was once in favor of a youth curfew, but has since realized it may not be a good idea.

Cotton said enforcement will be hard. Sayegh, who often touted his accomplishments, said the business curfew he sponsored is tackling violence in the city.

“If having a curfew will save our youth, I’m all for it,” said Cleaves who deviated from the lot.

“This curfew will set up our youth for failure,” said Abdelaziz. Guzman, who worked at McDonald’s as a 16-year-old girl to help her grandmother with expenses, said a youth curfew is a bad idea.

Guzman suggested it will prevent young people from getting jobs through interference. The curfew was once suggested to keep young people indoors so as to protect them from street violence.

Cleaves said residents need to work with police to make neighborhoods safer. She suggested ditching the code of silence by which gangs and criminals thrive in the streets as residents fail to protect their neighborhood by shying away from openly sharing information with police officers.

Abdelaziz suggested a police substation in the 6th Ward. Sayegh said he closed nine problematic nightclubs to deter street violence. At one bar a man was killed, said Sayegh.

Sayegh also mentioned the 79-percent drop in non-fatal shootings in business curfew areas. Abdelaziz said Sayegh failed to include a problem area at Main and Grove Streets where a shooting recently occurred.

Fischer provided a three part solution: enforcement, prevention, and re-entry. The 90-second response time was not sufficient for her to detail each of the parts.

Juan Sosa, 4th Ward candidate, did not attend the forum.