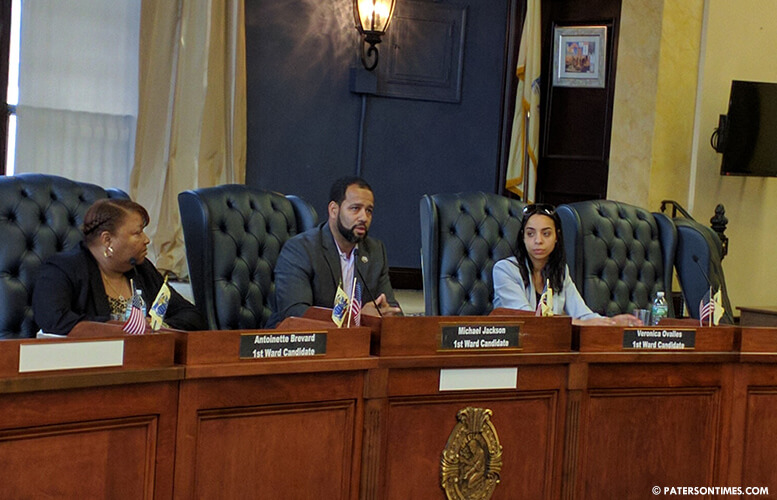 The three candidates offered differing ways the city can revitalize its downtown commercial district. Incumbent Michael Jackson said he will unveil a plan to promote local businesses through an online directory that will feature sales and specials from city businesses to entice customers.

Challenger Antoinette Brevard said the downtown’s salvation lies in entertainment and nightlife. “I’d like to see it become a more welcoming place in the evening. After 6 or 7 it’s just dead space,” she said.

Brevard said other communities have been successful in revitalizing their downtown by encouraging night entertainment. She said downtown also presents a great opportunity for eateries which can serve commuters close to the train station and bus terminal.

Challenger Veronica Ovalles said more needs to be done to utilize the space above the storefronts in downtown Main Street. She said those spaces should be renovated and turned into apartments.

“That can bring some revenue to Paterson,” said Ovalles.

Ovalles and others were asked what the council can do to assist the city’s schools facing a fiscal cliff. All three candidates said the council needs to work closely with the school board to demand more funds.

Ovalles, Jackson, and Brevard also agreed the city’s school district needs to make its buildings available after school for recreation.

Brevard said School 5, a community school that provides activities to Totowa section students, is a model that should be emulated at other 1st Ward schools, to provide after school safe haven for young people.

All three also agreed the historic Hinchliffe Stadium needs to be renovated. “We got to get it operating,” said Ovalles.

Ovalles agreed with the Friends of Hinchliffe Stadium to return the stadium over to the city government from the school district.

“I do believe Paterson should step in,” said Brevard.

Jackson said he prefers a shared services agreement between the district and the city over the stadium. He said any move by the city government to retake the stadium from the schools will only engender ill feelings between members of the two bodies.

Jackson at one point used a rebuttal to ask his opponents to name youth teams that will benefit from a renovated stadium.

“I couldn’t name one, but I can tell you how the taxpayers are suffering of elected city officials who have not paid $38,000 in taxes,” attacked Ovalles referring to taxes owed on Jackson’s Grand Street commercial property.

Jackson, who, when news broke of his owed taxes, said he would pay the unpaid taxes. On Wednesday afternoon he said he does not plan on paying the owed taxes which have turned into liens. He said he is in court with the lender and does not want to strengthen their hands by paying off liens.

Brevard responded to Jackson’s question by naming Nifty Lions and the Ghosts and Knights. “That stadium used to be the place to be on Thanksgiving morning for years and years,” she said referring to the epic matchup between John F. Kennedy High School and Eastside High School football teams.

Ovalles and Jackson took moments to attack each other at the forum. In one instance, Jackson said one of Ovalles’ supporter former city police officer Mohammad Mahmoud is attempting to foreclose on his building by purchasing liens.

Jackson, rather than identifying Mahmoud, who is providing Ovalles a rent free space for her campaign office, mistakenly said her campaign manager was buying the liens.

Whether Mahmoud purchase liens on Jackson’s property could not be verified.

Jackson, Ovalles, and Brevard staked out their positions on other issues. All three supported a move to bring garbage collection in house to create more jobs in the city.

“It’s a wonderful idea. We can put some people to work,” said Brevard of council president William McKoy’s proposal to have public works employees collect garbage.

Brevard also thought the city’s special police officer program is a good idea. She said she saw the special officers walking in downtown. The specials should be patrolling neighborhoods during school dismissal, she said.

Ovalles said the Class I are a liability to the city because they are not fully armed like regular offices. She suggested Class II, also part-time, but armed.

Jackson said he supports the special police for creating employment opportunities for city residents. “100% of that money we’re paying special police officers remains in the city. These are people who can become taxpayers, homeowners.”

Jackson’s proposal to turn the 1st Ward library into a technology center also received support from his two opponents.

“I think it would be a great idea,” said Brevard. She said she thought the flood damage to the building rendered it unsafe.

Jackson said a firm will conduct the needed abatement to make the building habitable.

“Where are the funds for this center?” asked Ovalles, who supports the technology center proposal. “Is it going to cost taxpayers at the end?”

“It will not cost the city a dime,” said Jackson. He’s proposal received support from the city council on Tuesday night. His proposal calls for the city to lease the building to a consortium which will operate the resource and technology center.

When asked to name two ways the city can increase revenue, Jackson said by ensuring all properties are on the tax rolls and entering into profitable shared services agreements with neighboring towns.

Ovalles did not directly provide two ways the city can increase revenue. She said the city should clean up its street and stabilize taxes.