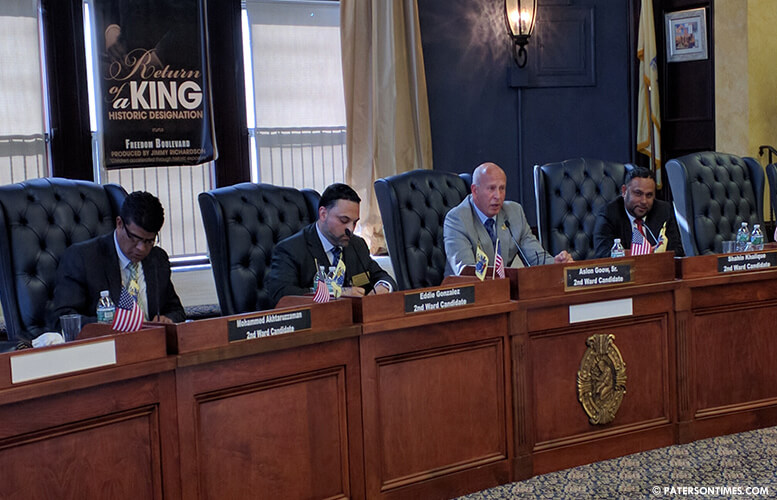 “What’s the point when you have a 5 star field and our kids can’t use it,” remarked incumbent Mohammed Akhtaruzzaman.

Aslon Goow said neighborhood schools should be open after school to provide recreational opportunities for children.

Shahin Khalique attacked Gonzalez for taking credit for work NJCDC completed. “It’s your job to do the work. What have you done on your own?” he asked.

Gonzalez, a high ranking official at the nonprofit, said he picked the sites and played an important role in securing funds that ultimately resulted in the new playgrounds.

Gonzalez took offense at Khalique’s campaign poster, which he stated said Khalique was the only candidate to have sponsored sports teams. And that Khalique is “doing what others are promising.”

“That’s 100% false,” said Gonzalez of Khalique’s claims in his campaign flyers. He also slammed Khalique for moving from Wayne to Paterson for the council run.

Khalique changed his address last year to qualify for this year’s municipal election, according to records.

Akhtaruzzaman said he facilitated a badminton and basketball program at School 27.

“Education is the single most important thing for the City of Paterson,” said Goow. “Without education, we’re going to be breeding a lesser quality community.”

Goow also said a stronger mayor is needed to work with the district to improve education in the city where only 10.7-percent of residents hold a four-year degree or higher.

Gonzalez said the district needs to secure local control. He said he supports a class action lawsuit against the state for more funds.

Akhtaruzzaman said he worked with the Parent Education Organizing Council of Paterson (PEOC) to fight for the Hani Awadallah School and the new School 16. “It took us 50 trips to Trenton,” he said.

All the candidates also agreed the city can move away from state aid.

“We have to get off transitional aid,” said Gonzalez.

Goow said waste and abuse in city government is draining money and hindering the municipality from ditching transitional aid. He cited the recent U.S. Supreme Court ruling on Heffernan v. City of Paterson that delivered a blow to mayor Jose “Joey” Torres.

Torres allegedly retaliated against former detective Jeffery Heffernan for supporting the incumbent’s opponent in the 2006 mayoral election. Torres’ alleged retaliation has cost the taxpayers $500,000 in legal expenses and could cost millions as the case moves forward in the lower court.

Gonzalez said temporary budgets are a reason the city is over spending.

“If we move sequentially, little by little, I see in five or six years, we can be off transitional aid,” said Akhtaruzzaman.

Akhtaruzzaman has been taking heat for voting on temporary budgets and three budgets that raised property taxes.

“I had to approve it. When you get to the budget, the money is already spent,” said the incumbent.

“I promise you again, I’m not going to vote for tax increases,” said Akhtaruzzaman. “I’ll not do it.”

Akhtaruzzaman voted against the most recent budget.

Goow voted against the massive 2011 tax hike, according to budget documents.

The four men were asked whether the hotspot business curfew ordinance should include streets in the 2nd Ward.

“Union Avenue just needs some police presence,” said Goow. He said it’s not necessary to designate that area as a hotspot.

“For one bad apple, you’re going to shut down the whole street?” said Khalique.

“This ordinance has really worked,” said Akhtaruzzaman, who was one of the prime backers of the ordinance. He agreed with Goow about the 2nd Ward portion of Union Avenue.

Police data shows 79-percent drop in non-fatal shootings in business curfew areas. The 2nd Ward does not have any designated hotspot zones.

Akhtaruzzaman, Goow, and Gonzalez expressed alarm at the more than 1,400 mail-in ballots in the 2nd Ward.

“There are very strong rumors out there these votes are being bought,” said Goow.

Khalique, whose campaign is running an intense vote by mail operation, said, “It’s a fair process.”

Gonzalez pounced on Khalique. He alleged the Khalique campaign is inducing people with gifts and money to pressure voters to handover  mail-in ballots.

Khalique responded Gonzalez took in more than 700 mail-in votes in 2014.

Goow pointed out that amounts to little more than 100 mail-in votes per a ward.

The three candidates gave the usual closing statements at the forum while the incumbent pleaded with voters for a second term.

“If Goow could have 12 years, why can’t I have a second term?” said Akhtaruzzaman. “Please give me a second chance.”

Goow, who said the loss of the council seat four years ago “humbled” him, asked 2nd Ward voters to consider: “Are you better off four years later?”